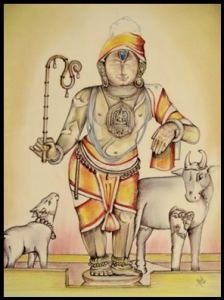 In this new series, we will go on a pradakshina of Bharata desha as we present, each month, a kirtan composed by Sri Swamiji on a particular kshetra, starting from Mannargudi in south India.

Mannargudi, a holy place located near Thanjavur in the state of Tamil Nadu, is known as Champakaranya kshetra and is also called Dakshina Dwaraka (Dwaraka of the south). The deity of the temple at Mannargudi is Krishna in the form of the famous Mannargudi Rajagopalan. Here Krishna is in the form of a cowherd who goes to the forest (to herd cows) dressed as “Raja Mannar” – a king – which is how Yashoda likes to dress him up.

Just like Kulasekhara Azhwar puts Kannapuram Sauriraja Perumal to sleep, here our Guru Maharaj sings this Sanskrit kirtan in Nilambari raga. The beautiful form of the Lord is described in the charanam, where Rajagopalan wears a single vastram (piece of cloth) and shines forth with radiance. The kirtan also talks about the divine mother of the kshetra – Sri Champakavalli  Thaayaar.

Pallavi:
O young boy of Champakaranya (forest of Champaka trees)
O Rajagopala (King of Cows and Cowherds), You are the protector of the whole world!

Charanam:
Adorned with a single piece of cloth, You shine forth with radiance
You are one who enjoys to be worshiped with a garland of different ragas

Hail to You, O Beloved of Sri Champakavalli
O Rajagopala, You are verily the protector of the cows