50km from Chennai, on the Chennai-Tirupathi highway, is the town of Tiruvallur – a DivyaDesam. Here, the Lord is known as Veera Raghava Perumal.  He is found lying on Adisesha with Lord Brahma sitting on a Lotus originating from his navel. His consort is Goddess Kanakavalli. 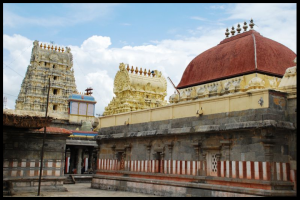 Legend says, the town got its name, Tiruvallur, because Lord Vishnu came down as a Brahmin to his devotee Saalihothirar’s house and requested him for a place to spend the night.  In Tamil, “thiru” refers to Lord and “vul” means a place and hence, the name Tiruvallur.
Tirumangai Azhwar and Tirumazhisai Azhwar have visited Veera Raghava Perumal temple and sung His praises. Sri Swamiji has also composed a beautiful song on the Lord. The song set in the raga Kedaram describes the Lord’s beauty and prays for devotion at His feet. The lyrics and the meaning are presented here.

Meaning
Victory to Sri Veera Raghava
Victory to the consort of Vaidehi
The great son who kept his father’s word,
who took a firm vow to serve Brahmins,
whose lotus feet were served by Lord Brahma
whose pure character attracts his devotees

Gold ornaments decked coronated Rama!
The brave-hearted One, who was worshipped by the king of Elephants
The consort of Kanakavalli with a beautiful form
Pray bestow your merciful grace on me!

The blissful one who is worshipped by Hanuman
The Truthful One who protects the surrendered
Pray bestow me unswerving devotion to your Feet
The favorite Lord of the blissful Muralidhara!