In this series, we will go on a pradakshina of Bharata desha as we present, each month, a kirtan composed by Sri Swamiji on a particular kshetra, starting from south India and then going north.

Srirangam, a beautiful island-town located in the middle of River Kaveri is the foremost among the 108 Divya Desams. It is also known as “bhooloka Vaikuntam” (vaikunta on Earth). 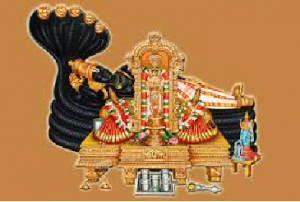 land. Till this day, the deity can be found facing south towards Sri Lanka.

The temple, by itself, is an architectural marvel. The main shrine is ensconced within 7 concentric rectangular structures that philosophically represent the 7 chakras of the human body.

Innumerable devotees have sung songs on this Lord. 11 of the 12 Azhwars  have sung praises of Him. Andal worshipped Him in sringara bhava, married Him and merged with Him here at Srirangam.

Our Swamiji too has sung many songs on this deity. This month’s song, “Ranganatha Parabrahmane” is set in Kanada raga, a raga ideal for bringing out kaarunya rasa. This song extols the virtues of Lord Ranganatha and seeks His blessings.

Charanam
One who resides amid the diverging Kaveri
One worshipped by Sri Ramanuja
One who enthusiastically casts his constant, merciful gaze
One reclining in a yoga posture