Although ‘Hinduism’ is said to have many ‘gods’ and ‘goddesses’, the truth is that all the gods are different names, forms and attributes of the One Supreme God.

Among the various forms of God, Lord Ganesha is considered as the remover of obstacles. He is also celebrated for possessing both wealth and knowledge, and is acknowledged for his versatile nature. It is a custom in India to pray to Lord Ganesha before commencing an auspicious event or project. If the pooja is to be done in a place where there is no vigraha (image) of the god, then a pindam (ball) is made out of a handful of rice flour representing the deity, and flowers, kumkum, chandan, etc. are offered to it. 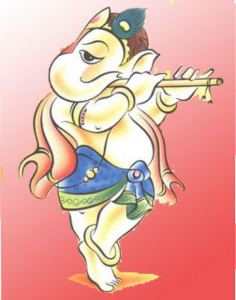 At the end of the pooja, everything, including the pindam, is offered mentally to God. This denotes that everything (names and forms) that comes out of Brahman (Purnam, the Complete, Supreme God) finally goes back into That (the Origin of Everything). Here is a story that carries the same significance.

There was once an old lady who lived by herself in a village. One day, as she was sitting in her porch, a saint passed by. She invited him inside her home and offered him some food and water. The saint was very pleased with her hospitality and learned that she lived alone. He offered her a round white stone and told her that it was Lord Ganesha. He advised her to take care of him as her own son. This lady grew very affectionate towards this stone. She began to take care of it as she would her own little baby. Every day she fed the little stone, bathed it and put it to sleep by singing lullabies to it. Days rolled by and the old lady grew weaker.

One fine morning someone knocked on her door. She opened the door and saw a beautiful blue boy standing there. He had a flute in his hand, a peacock feather on his crown and stood in an attractive, gracefully curved pose. He was very bright and strikingly handsome. The lady could not see him properly because of his radiance.

Squinting her eyes, she asked him, “Who are you?”

He replied, “I am the little son that you have been taking care of everyday!”  The old lady was puzzled, and she exclaimed, “But my son is round and white!”

The little blue boy simply smiled and took her to His abode.