Sri Anandamayi Ma, who is counted among the greatest saints of the 20th century, was born on April 30th 1896 in Kheora, East Bengal. She was named Nirmala Sundari Devi meaning “Goddess of flawless beauty”. Born to pious, spiritually inclined parents, she exhibited spiritual characteristics even when she was born, as she did not cry but instead portrayed a peaceful countenance. In fact, to the surprise of others she later even remembered the names of the people who were present at the time of her birth. 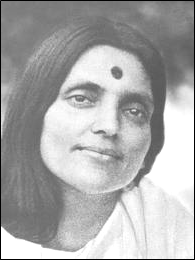 Even as a child, Anandamayi Ma was spiritually very sensitive. She would go into states of ecstasy whenever she heard the chanting of religious mantras. On certain occasions, while playing with her friends, she would suddenly become immobile and then chant the holy names. She used to regularly chant the “Hari” nama as learned from her father.

As per the custom of those days, Anandamayi Ma was married at an early age of 13 to Ramani Mohan Chakraborti of Vikramapura. At the age of 18, she went to live with her husband. She performed all the household duties with dedication and took care of her husband very well. But their marriage was never consummated. Later, her husband realized that she was in a higher plane of spiritual awareness and that she was constantly in a state of divine ecstasy.  In 1922, without the guidance of an external guru, she went through the process of initiation in accordance with the shastras. The guru emerged from within her, imparted instructions to her and then was absorbed back into her.  Later, she gave initiation to her husband and named him Bholanath.

In 1924, when Ma moved to Dacca (now Dhaka), people came to know about her spiritual qualities and began to seek guidance and solace from her. Though she had never been formally educated, she would talk with a perception that would amaze even well-versed scholars. When she went into spiritual ecstasy during kirtans her body would sway to the rhythm of the kirtan. She would enter into a deep trance for long hours after this. It was her husband Bholanath who would try to bring her out of this state by calling to her. When she responded, he would advise the lady devotees to rub her hands and feet and keep talking to her so that it would bring her back to the worldly plane. She would roll on the ground; shed profuse tears. She would sometimes dance for a long period. Sometimes she would talk rapidly. Her smiling countenance earned her the name ‘Kushir Maa’ [Mother of Bliss].

In 1932, she left Bengal and travelled all around the country. Her divine attraction drew a huge group of followers around her. Even political leaders like Gandhi, Nehru, Rajendra Prasad came to have her darshan. She was also known for her siddhis or yogic powers—she could read her devotee’s thoughts at a distance, make her body shrink and expand, and heal the sick. But what truly attracted people to her was the love and happiness she emanated and the peace that they felt in her presence.

Anandamayi Ma attained samadhi on 27 August, 1982 in her ashram in Dehradun. Her body was taken to Kankhal and a Samadhi was built for her there. She had been an embodiment of love and affection, offering comfort to her numerous devotees. Her Divine presence is felt at her samadhi even today.

Here are a couple of interesting incidents from Sri Anandamayi Ma’s Life:
Ma’s Compassion
Once, Ma along with two attendants of hers went to the railway station in a devotee’s car. There she requested that devotee to buy three train tickets to Saranath but the devotee hesitated, for there was no train to Saranath for the next twenty-four hours. But Ma was adamant and the tickets were bought.
A train arrived and Ma boarded the train with her two attendants, despite being told that it would not stop at Saranath. After some time the train suddenly stopped as there was no clear signal. At once Ma got down asking her two attendants also to get down. She began to walk away from the station with quick strides. They could not comprehend what was happening. The two attendants soon realized that they were in Saranath!
Ma took them through the path that led to Birla Dharamsala. She entered the Dharamsala and walked straight into a particular room within. Here a female devotee of Ma sat crying out for Ma! This Marathi devotee had come from far to Saranath as she had been [mis]informed that Ma was there. On reaching Saranath she was terribly disappointed on learning that Ma was at Varanasi. The Dharamsala was huge and in a remote area of Saranath. This devotee was unnerved to spend the night all alone there. Further, she was suffering from high fever. She had begun to desperately cry out to Ma for help! Now Ma stood before her and said that everything was fine as she had come. Ma then spent the night talking and joking with her!

Way to Reach God
When Ma was at Madras, a devotee asked about the way to reach God. Ma replied, “Cry for Hari and you will get Him.”
The devotee again responded that he was incapable of crying. She in turn replied, “In that case, keep company of those who can.”