Sri Shridhara Venkatesa, known as Sri Shridhara Ayyaval, was a great saint who gloried the path of devotion through Nama Sankirtan. He was a great Shiva bhakta and always chanted Shiva’s name.

Here is an interesting incidents from his life: 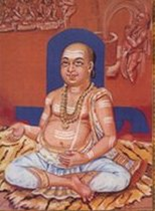 Sri Ayyaval, who moved about south India constantly spreading the divine names of the Lord, once happened to visit Tiruchirapalli in Tamil Nadu, India. The king of the area was a devotee of Lord Vishnu. but he had great respect for Sri Ayyaval and his devotion to God.

However, some people who had heard the discourses of Sri Shridhara Ayyaval felt that he had more leaning towards Lord Shiva than Lord Vishnu. They told the king about this and induced him to test the saint’s devotion. The king agreed and ordered the temple priest to dress up Sri Mathrubhuteshwara (Lord Shiva) as Lord Krishna and take him in procession. When the procession passed through Sri Ayyaval’s house, he was meditating on Lord Shiva. When the procession passed in front of his house, he came out of his trance, and ran out hurriedly to have darshan of Lord Matrubhuteshwara.

Finding Lord Krishna there instead though, he spontaneously prayed to Lord Krishna, “O Lord Krishna! When will I spend every moment of my life in meditating on your Lotus Feet by reminding myself of the transitory nature of this world; by being humble; by knowing my deficiencies; by turning a blind eye to other’s faults; by being compassionate towards all living beings; by being a servant of the devotees of the Lord and eyeing both joy and sorrow alike?”

He thus composed 12 verses known as ‘Krishna Dwadasa Manjari’. In a few verses in this, he did not hesitate to sing that Lord Krishna’s vision was not easy for Lord Shiva Himself!

Hearing this, the king was overjoyed at the saint’s true devotion and glory. The people who had induced him to test the saint fell at Sri Shridhara Ayyaval’s feet and apologized for their ignorance and arrogance. Knowing Sri Shridhara Ayyaval spent every moment of his life striving to uplift the masses by spreading the nectarine Divine Names of the Lord.