What Should We Seek from God If He Appears Before Us? 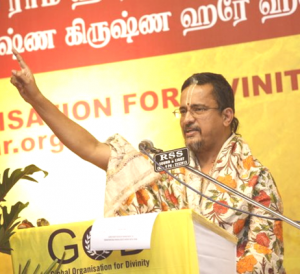 HH Maharanyam Sri Sri Muralidhara Swamiji has conducted Mass Prayers on January 1st of every year since 2007. These mass prayers are held in a new city each year. In the past years, such mass prayers were held at cities such as Chennai, Arakonam, Tuticorin, Madurai, Vellore to name a few. Sri Swamiji refers to the New Year day as ‘Kalpatharu Day’ to signify the momentous occasion that happened in the life of Sri Ramakrishna Paramahamsa on Jan 1st, 1886 when the saint transformed into a ‘wish-fulfilling tree’ (Kalpatharu) for his ardent disciples and devotees.

In every Kalpatharu Day Mass Prayer discourse, Sri Swamiji emphasizes on the rarity of attaining a human birth, importance of chanting the names of God, and of attaining a Guru/satsang. This year’s mass prayer was held at Puducherry.

Here we share the key messages of Sri Swamiji from his discourse that day.

Swami Sivananda of Rishikesh used to often say, “Start the day with Nama, fill the day with Nama and end the day with Nama.” Aligning to these words, we too start the new year with Nama, fill the entire year with Nama and end the year with Nama. Every year of our lives has been filled with Nama. Prayers in a congregation have more powers than praying alone. A basket full of jasmine is more fragrant than a solitary one. When thousands of people, nay devotees, congregate and pray with utmost faith and devotion, where else can God be? He will be here only! For our prayers to get fulfilled, there is no easier way than mass prayers. This path of ‘mass prayers’ was shown by Mahatma Gandhi. It has been chronicled that Mahatma Gandhi conducted many such congregational prayers with chanting of Rama Nama.

One key aspect of our religion is worshipping of God in a temple. But, even to do this, one has to take the effort of visiting a temple. There is an easier way to worship God, which is to perform Nama Sankirtanam from wherever we are. This path can be followed by one and all. Even when one chants Nama just once, God appears in that place. One might not have the capability to view Him, but His presence there is certain. When one constantly chants Nama, then one day he’ll be bestowed with the power to experience God whenever Nama is chanted.

Kalpatharu, the celestial wish-fulfilling tree, fulfills all our wishes, be it good or bad. There is a mention of this tree in Bhagavatam too. Anyone who sits underneath this tree and wishes for something, has their wish fulfilled. But there is a potential danger as we do not know what is right for us. What we seek today might turn out to be harmful to us in the future. And as the mind is not in our control, there is a chance that we might think of something bad and that will also get fulfilled by the Kalpatharu. However, there is a better kalpatharu amidst us on earth, which is nothing but our Guru. He bestows only that which is good and beneficial for us. When we submit ourselves to the Guru, in due course of time, He will transform the mind and ensure that negative thoughts never arise.

One of the main reasons for Sri Ramakrishna to become known around the world is Swami Vivekananda. Swami Vivekananda’s life span was very short and the time he spent with his master was very limited. He went around India and the world after the samadhi of his master. He established the spiritual strength of India on the world stage. Before his arrival, westerners had a false impression that India was a country of superstitions. But he removed this false notion and made them understand that India is a land of great spiritual giants and exemplary philosophical treatises. All the lofty works were performed by Swami Vivekananda due to the penance bestowed on him by his master. The penance was none other than the initiation into the divine name “Rama”.

The combination of utmost devotion to his master and the Rama Nama was the reason for the grand divine works performed by Swami Vivekananda. His steadfast devotion to Swami Ramakrishna can be illustrated by one incident. During his travels to the United states, many of his followers were insistent on knowing about his early life and the reasons for him attaining the exalted state. One fine day, Swami Vivekananda finally accepted to talk about his early days. A huge crowd gathered to listen to the Indian monk talk about his personal life.

In front of thousands of people, he glorified India and the saints born in this divine land, the holy rivers that flow, the land that witnessed God’s various descents. He continued that amongst the many great saints born in this holy land, by the banks of river Ganges in a village called Kamarpukur in Bengal was born his master Swami Ramakrishna. He then narrated the entire life story of his master with tears gushing forth and with a trembling voice. After a long narration of his master’s life he quipped that he was an unworthy disciple of this great master. This, he concluded, was his life story.

The life of Swami Vivekananda is a miracle. The impact that he created around the world in a short span of time is nothing short of miracle. As said earlier, this miraculous work was a combination of this devotion to his master and the Rama Nama he chanted.

What should we seek from God if He appears before us? We have lots of needs in this world. Some might want relief from a disease, for some it could be to repay a debt, for others it could be peace and unity in the family, prosperity, good education etc. There are as many problems and needs as there are people on this earth. Amidst all these problems, we also have a desire not to be born again and reach the holy feet of the Lord. It is oft quoted that the path of spirituality and the path of worldliness are opposites. However, the desire of a father to provide good education to his children is a genuine one. Similarly, his desire to get his children married at the right age. These desires cannot be shrugged off.  So both worldly and spiritual desires are genuine and must be addressed.

Let’s assume that God appears before us and proclaims that we can ask one boon, only one. We’ll be confused as our worldly wants are many and there’s salvation to ask for as well. What if by the time we decide, God disappears. I’ll tell you what to ask for. If God appears before you and gives one boon, then without batting an eyelid, seek for the company of saints as the boon. The reason being, that in the company of saints, we get bestowed with all worldly and spiritual needs. This is an easy way to dupe God.

If we submit ourselves to the saint and constantly chant Nama and listen to His words, soon all our worldly problems will fly away, our mind will be at peace and get strengthened. We will be bestowed with the knack to lead life. We’ll be able to experience this. Only good things will happen. At the end of this journey called life, we will attain the Lotus feet of the Lord for sure. Is there an easier path than this?