Swami Ramakrishnananda, the Apostle of Sri Ramakrishna to the South – By Swami Tapasyananda

Among the sixteen monastic disciples of Sri Ramakrishna Paramahamsa, Swami Ramakrishnanda stands out for his intense Guru bhakti. He was the only one of the disciples who, after the passing of Sri Ramakrishna, instead of practicing his personal sadhana like the others, remained constantly by the side of his beloved Master’s remains, taking care of Him, worshipping Him and serving his brother disciples even amid poverty and physical distress. 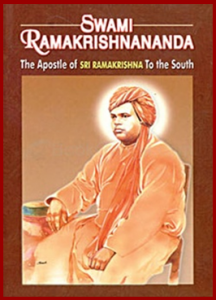 Despite all the struggles he had to face in his life, Swami Ramakrishnananda never flinched because he was constantly in a supreme state of surrender to his Master, and hence he knew that it was only Sri Ramakrishna who was doing all the work while he was simply only an instrument.

This book is a must-read, especially for all those who are under an uttama Guru, for it shows us what true Guru bhakti is. Here is an excerpt from the book:

“Ramachandra Datta, a prominent house-holder disciple of the Master, says: ‘Sasi’s (Swami Ramakrishnananda’s pre-monastic name) service is incomparable and inimitable…Sasi served Paramahamsa Deva heart and soul without any question, without any murmur and without any consideration of personal inconvenience… We have only heard of Hanuman’s matchless devotion as a servant to his Lord. Sasi showed the perfection of such devotion before our very eyes…All those who approached Paramahamsa Deva had some ulterior motive or other. They had asked ‘How shall I be saved? How shall I progress in spiritual life? Or how shall I walk on the path of Yoga?’ But Sasi had no such motive whatever. He surrendered his humble self completely to his Master and learnt only the religion of selfless service from him…There is no doubt that whosoever will hear the thrilling story of Sasi’s loving service to the Master will attain devotion to the Master… Brother Sasi! You mastered the secret of real service. To the full satisfaction of your heart, you have done service to the Guru which is the most meritorious act in religious life. Brother dear, born as a man, you understood the duty of human life. That is why you have been the object of the Master’s special grace. By his grace, you stand at the head of the circle of his attendants. You are his chosen son and servant and are second to none in service of him.’ “

One Response to "Swami Ramakrishnananda, the Apostle of Sri Ramakrishna to the South – By Swami Tapasyananda"