Lord Ganesha and the Saint of Kanchi

The following article is from Samyukta Sainath Iyer from Atlanta, GA.  This article is based on an excerpt from Sri Swamiji’s Ramayanam series where he shares his personal experiences with Sri Chandrashekharendra Saraswati Swamiji,  fondly referred to as Mahaperiyava. 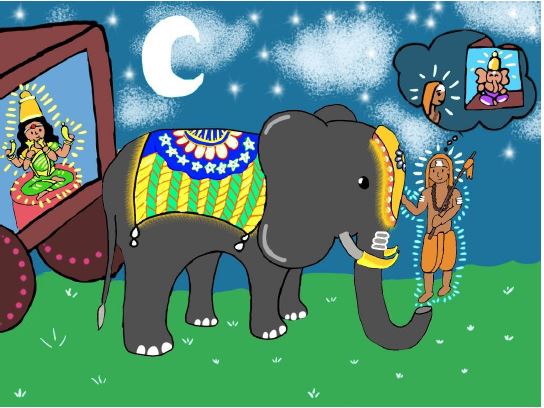 One peaceful night, in Thenampakkam, a quaint, rural town near Kanchipuram, Mahaperiyava was resting at the Shiva Sthanam, with a simple kavi (saffron) cloth as his blanket.  He had also rolled some cloths and placed them under his head to be used as a pillow, and was peacefully sleeping near the temple grounds.  Suddenly colorful, elaborate firecrackers began bursting loudly through the night sky, pleasantly surprising all of Periyava’s devotees.

“Do you all know why firecrackers are being burst at this hour? Where are they coming from?” inquired Periyava.

“Well, if Kamakshi Amman is coming for all of us on a chariot procession, why don’t we all go and take Her darshan?” said Periyava excitedly.

“But Periyava, it is already nearly 10:30pm.  Most of the time, firecrackers only burst when the procession reaches the Kachapeshwarar temple, which happens near the end of the route.  From there, Ambal returns to Her sannidhi in at most 10 minutes.  Even if we start walking right now, we’ll miss the procession, and won’t get darshanam in time,” shared the devotees.

But Periyava, focused and confident, had already gotten up with determination and picked up his dandam to start walking towards the Kachapeshwarar temple.

Periyava first went to the sannidhi of Lord Ganesha in Thenambakkam temple and whispered something quietly in Ganesha’s ears, and took a coconut and rolled it in front of Ganesha on the ground.  Both Periyava and Ganesha were having a conversation only they could hear and understand.

Without any delay, Periyava began walking towards the procession, and the devotees followed him.  Periyava and his disciples only traveled by foot, and the disciples all prepared themselves for the seemingly futile walk ahead.  Along the way, they whispered amongst themselves, “Well, get ready for a long night time walk everyone! At the end, we’ll get to see a temple that has already been closed!  The whole procession will be finished by the time we get there!”

They kept speaking in this way on the whole journey, but upon arriving at the temple, to their great surprise and wonder, Amman’s procession had not moved an inch from its position near Kachapeshwarar’s temple, and the grand chariot was standing still, outside the temple.

The devotees were amazed by this miracle that surpassed logic or precedence!  “Why hasn’t the procession started yet?” asked the devotees.

“Oh, it’s our elephant!  Every time we try to start the procession and move the chariot, the elephant makes a big commotion and refuses to budge.  But as soon as we stop, the elephant calms down and remains peaceful.  We’ve been in this dilemma for a while now!” responded the temple officials.

At that moment, Periyava, smiling knowingly, walked over to the elephant and encouraged it, saying “Come, elephant!”  Immediately, as if by magic, the elephant followed Periyava, with its graceful and royal gait.

Now we see how previously, Periyava had whispered something inaudible to the Ganesha in Thenampakkam, and now, the elephant, leading the procession in the Kachapeshwarar temple many kilometers away, was also appeased by Periyava’s request.  This shows us the power and grace of a Guru, and how closely mahans like Mahaperiyava are connected and communicating with Bhagavan.

Another time, Sri Swamiji had gone to take darshan of Periyava.  Periyava was standing near a sannidhi of Ganesha within the sanctum of Sureshwaracharya.  There, Periyava gently knocked his head four times while facing Ganesha.  “If we gently knock our head just four times in front of this Ganesha, He will make sure all of our activities and work go on without any worries or obstacles,” said Periyava to Sri Swamiji, and this incident is still vividly imprinted in Sri Swamiji’s mind.

From these stories of mahans like Mahaperiyava who lived on this earth so recently, we can all see how Lord Ganesha is both the One who gives obstacles, and the One who removes obstacles. No matter whether something may seem like an obstacle or a relief to us in the moment, everything He does is always to ultimately bless us all.

We also witness the importance of obediently following the words of our Guru, even when the path may not seem clear or feasible to our eyes. The Guru, through his connection with Bhagavan, creates a simple and pleasant path for us to reach Bhagavan, and, as their devotees, all we have to do is put our best effort in our daily activities and trust in Their plan.