This article is based on an excerpt from Sri Swamiji’s Ramayanam series where he talks of a conversation between Ramakrishna Paramahamsa and his devotee Mahendranath Gupta. 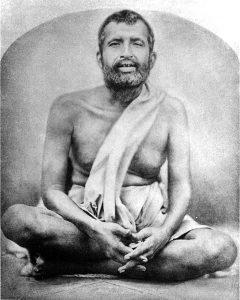 Sri Ramakrishna Paramahamsa promptly stated, “You speak about Brahmam, please tell me what that is.”

“Where is that Brahmam?” inquired Sri Ramakrishna.

He further added, “Does that Brahmam know everything? He is sarvagnyan. He knows everything. Then, isn’t it true that if a devotee believes that the supreme is present in the murthy and worships it, the Brahmam will know?”

Sri Ramakrishna said, “Is there anything that Brahmam can’t do? He is sarvashakthan (all-powerful). Is it possible for that bhaktha to receive grace through that archavatara in such case? Yes, he can.”

At that moment, Mahendranath Gupta had realized and understood ‘’Saguna Upasana’.

How can the omnipresent Bhagavan not be believed to be also present inside the archavatara to which we pray? Even in the archavatara form, Bhagavan is present. He knows everything. When a Bhakta calls out to him through his archavatara form, he knows. Even when we speak to him in any language, he understands. Language isn’t important over here, the thoughts that arise in our mind are significant.

One Response to "Mahendranath Gupta and Ramakrishna Paramahamsa"