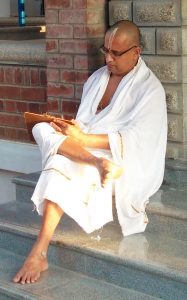 Q: Swamiji, I have wondered at some people. They have all comforts and do not have any shortcomings; yet they are not happy. They live without even enjoying all that they have. Why is this so?

A: You have asked a wonderful and profound question. Listen to me patiently. The same question is asked by Parvati Devi to Parameshwara, in the Mahabharata. I will tell you the same answer that Kailasapathi Shiva Himself gave to Devi.

In their earlier births, the people you speak about did not perform charitable acts on their own accord and out of their desire, but did it on the insistence of others. There would not have been even an ounce of shraddha (dedication) in the charitable acts that they performed. Hence in this birth, they got all material comforts because they performed the charitable activities, but since they did not do it out of their own desire, they do not enjoy the benefit of having all the comforts.

Now you may have another fair question. Why are some people happy and contented even though they do not have wealth or physical comforts? This too has an answer in the Mahabharata. Such people, in their previous births, are those who lived in poverty and yet desired to do charity always. Since they did not perform charity, they do not have wealth in this birth, but since they had a genuine desire to do charity, they still lead a happy, contented life in this birth.

Q: Aha! Now I understand this well, Swamiji. How deep is our Sanatana Dharma!…

A: This itself gives us such wonderment, doesn’t it? This conversation happens in the Anushasana Parva of Mahabharata. Some people attain position and wealth without taking any big effort at all. Some others are able to get all that only after much hard work and effort. Yet others, even after putting in humongous effort, still struggle as they are unable to enjoy even a tiny bit of achievements such as name, fame and wealth. Why this difference?

In this world, those who – place primary importance on charity and righteousness, find those who are truly worthy of charity, go on their own accord to such people and give to them in all humility without any show, and make those who receive the charity happy – such people, in their next birth, attain the fruits of these easily without any apparent effort.

The second kind of people are those who give only to those who come and request them for help. They will give only during those times when there are people who ask. In their next birth, such people labor hard and after much effort attain the fruits of their actions.

However, those who do not give anything to even those who ask, or worse, get angry or disrespect them, do not attain the fruits in their next birth even after much effort. Only he who sows the seed, reaps the fruit.

Some people gain wealth and physical comforts only when they are old and have reached an age when they cannot really enjoy worldly pleasures; yet others have material pleasures at their disposal but are unable to enjoy them because of disease or sickness. The reason for this is that, in their previous births, despite being wealthy, these people started to be charitable only in their old age, or they became terminally ill and began to give away their wealth only when they realized that they would not survive.