King Prithu was a descendant of Dhruva. After being informed that the people in his land were suffering from lack of food, strength, and happiness, he became disheartened. Mother Earth came to him in the form of a cow and told him that she carried the seeds of everything the people needed in her udder and that she would give it to them if they were willing to work for it. 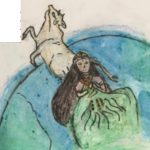 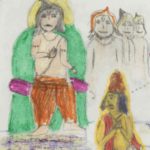 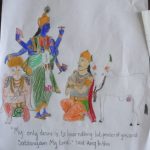 Prithu and his subjects did as she said and soon, the earth was green and happy again. So pleased with the Earth, he called her his daughter. That is why she’s known as Prithvi. King Prithu, for the first time, created villages, towns, patasalas, harvest cycle, and secure communities which to this day are the most important markers of society.

Prithu decided to perform a hundred horse sacrifices (ashwamedha yagas) to distribute all his wealth but was repeatedly stopped by Indra during the 100th one. King Prithu overcame his anger after listening to Brahma and Lord Vishnu’s advice that he should not be attached to worldly success and realized that all happens by God’s will only.

Happy with Prithu’s generous nature and contented approach, Lord Vishnu blessed him with the boon that he would always hear the praise of the Lord and have satsang.

As he wished, the four Sanatkumaras appeared before him and taught him the way to reach God. He retired to the forest focusing on attaining moksha.

From Prithvi’s story, I have understood that God’s Nama and Satsangam are very important for giving us strength in good and bad times. Also, we should be very contented, sharing our resources with others who do not have much and be sensitive to plants and animals, seeing Lord Vishnu in everything and everyone. What we learn now, that environmental problems and wasteful consumption are not right, were seen as non-dharmic values to avoid very strongly even in Prithu Maharaj’s time. I learned so much from this dharmic historical story.

Story and Illustration of Lord Vishnu with Prithu by Mira Chary, 11 years Dallas Tx
Illustration of Mother Earth as cow and Prithu with the Sanatkumaras  by Sidharth, 9 years, Dallas Tx