Jacksonville GOD Satsang celebrated Kalpatharu Day with a 6 hour long Akanda Mahamanthra Keerthan at the Shirdi Sai Temple starting on December 31st 2017 at 6 pm. By Guruji’s immense blessings, the Nama was well-attended from start to finish. Jacksonville Gopa Kuteeram children kicked off the Nama with each of the attending children, leading for a few minutes. Children’s continued participation throughout the Nama, inspired many attendees including children outside of Gopa Kuteeram, to take the lead for some time too. Children also supported well in the percussion department. The concluding 45 minutes of the Nama was highly energetic and once again had children leading the way. The temple had not been open till midnight on New Year’s Eve historically but due to the event, it was, this year. Over 60 devotees chanted the Mahamanthra at midnight and the event concluded with the Aarthi. 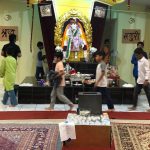 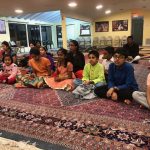