By the grace of Sri Swamiji, Detroit GOD Chapter, conducted the “Annual Day “ function for the year September 2016 to June 2017 on June 10, 2017 from 3 Pm to 4 Pm. The kids and the parents participated very enthusiastically, where the kids were dressed up in different deities and performed a “Fancy show”.

The event started with the welcome note by Smt. Booma Sridhar, followed by “maha Mantram”, by the audience. The function started with the “fancy dress” where the kids were dressed up as Lord Shiva, Lord Krishna, Lord Panduranga, Radhe, Goddess Lakshmi and Hanuman. Each kid came up to the stage and said few words about the diety they were dressed up.

Following the “fancy show”, all the kids sung few bajans and slogas that were taught in the class. Following the recital of the slokas, the “certificates of completion” was given to the children by Michigan coordinater, Sri. Sridhar Venkatachari. The function concluded with the singing of “maha mantram keertam” by the audience also as well. Finally, the “vote of thanks” was given by Smt. Booma Sridhar. The function was a grand success with the enthusiastic participation of the kids as well as their parents. 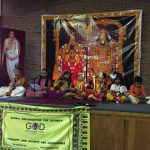 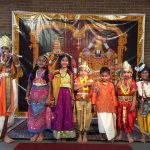 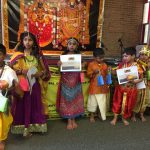 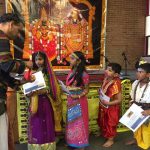