Dallas G.O.D Chapter, celebrated MadhuraUtsav 2014 from Nov 22 till Nov 29th 2014 at Sri Guruvayurappan temple in Dallas, Texas.
The ever merciful and compassionate Sri Swamiji and the divine couple, Sri Madhuri Sametha Sri Premika Varadhan graced Dallas to be drenched with this nectarine bliss for 7 days. Close to 250 devotees attended the Utsav with awe and reverence.
November 22nd- Bhagavatha Mahathmiyam
On the auspicious day with Lord Guruvayurappan’s immense grace, Dallas Bhagavatha sapthaham started with decorating and preparing the Guruvayurappan Temple Cultural Hall for this grand event. In the evening Sri Ramanujamji extolled the beauty of Srimad Bhagavatham and how one should enjoy the nectar like a Rasika rather than analyzing it as a scientific study. Hundreds of devotees thronged to hear Sri Ramanujamji beautifully explain the greatness of Bhagavatham and how it can destroy the pain caused by forces of nature, by others and by self ( aadi-deivika thapam, adi-bouthika thapam and adyathmika thapam) and he also talked about Atma deva’s story where evil intention of Thunthuli gave birth to evil action in the form of Thunthukari’s birth and how their distress was pacified through Gokarna who has large ears signifying the power of listening Krishna’s story which is enough to unburden a soul. The satsang took place at the residence of Sri. Rao and Smt. Shruthi’s house in Coppell,Texas. After mahaprasad dinner, the day culminated with Dolotstavam to the divine couple at the Guruvayurappan temple cultural hall.

November 23rd – Day 1 of Sapthaham
The first day of the Bhagavatha saptham started off with the abudance grace of Krishna as the sun was shining with no hint of cold weather and it was as though Krishna understood the bhaktha’s desire and made sure everything was perfect. In the morning Bhagavatha parayanam (recitation) took place. In the afternoon Smt.Shanthi Mahadevan and her Pranavam school of music presented a feast to the ears by rendering kirtans. In the evening Sri Ramanujamji explained the essence of 1st Canto of Bhagavatham, Narada Maharishi’s story, and how to enjoy the essence (Rasa) of bhagavatham. The day culminated with mahaprasad dinner and dolotstavam.

November 24th – Day 2 of Sapthaham
Bhagavatha Parayanam till 6th canto took place in the morning, followed by lunch mahaprasad. In the afternoon the Dallas G.O.D Gopa kuteeram children put together a dance cum play describing the nine forms of Bhakthi (Navavida bhakthi). All the children did an excellent job in expressing their love for Krishna and Sri Swamiji by acting and dancing to perfection. In the evening Sri Ramanujamji enthralled the devotees with the different Bakthi Bhavas of Kunthi devi and Bhishma through their praise (stuti) for Bhagavan. After mahaprasad dinner, the divine couple was carried in a palanquin and the majestic look of the lord mesmerized the devotees. The day culminated with Dolotstavam.

November 25th – Day 3 of Sapthaham
Bhagavatha parayanam included Canto 6 and parts of Chapter 7, Narayana kavacham and Narsimha avataram were recited. In the afternoon Purandaradasa Kirthis were beautifully sung by TSK school of music. In the evening Sri Ramanujamji beautifully explained Dhruva’s charitram and Vidura’s conversation with Sage Maitreya. In the evening the divine couple blessed the devotees in Gajendra Vahanam ( Elephant mount). Chi. Chinmay Senapathi played the Clarinet trying to match the wonderful Gajakathi and Simmakathi of the Lord during this divine procession.

November 26th – Day 4 of Sapthaham
The auspicious day included Parayanam of Gajendra stuti, Vamana avatar, Lakshmi Avatar , Ambareesha charitram and till 10th Canto up until the birth of Lord Sri Krishna. All the devotees did the parayanam of 10th Canto first 3 chapters, and Lord Sri Krishna’s birth was celebrated and Nandotsavam was performed. The cultural hall reverberated with the rendition of Sri Swamiji’s kirtans, while the little Gopas and Gopikas expressed their joy through kolattam dance around little Krishna. A grand feast was served as mahaprasad. In the afternoon students of EshwerNatyalaya performed Bharathanatyam dance for various Krishna songs. In the evening Sri Ramanujamji dwelled deep into various parts of Bhagavatham. Following the lecture, the divine couple were seated in Kudirai Vahanam ( horse mount), with Sri Premika Varadan holding the reins as he majestically went around the hall at times slowly watching the sights around Him and at other times like a lightning bolt travelling at extreme speed. It was truly a sight to behold, and all the devotees were spell-bound and were mesmerized in this rare sight.

November 27th -Day 5 of Saptaham
Bhagavatha parayanam of 10th Canto continued, while the devotees decorated the swing for Nikunjotsavam to be held that day. Krishna’s various leela’s were recited, a special thirumanjanam was performed for the divine couple. A grand feast was offered to the Lord, and two Gopas (Chi.Arjun Meyappan and Chi.Akilesh Anand) recited the Indira Stuti as part of Govardhana leela.In the afternoon, the divine couple was adorned with beautiful flowers and jewelry, and was watching the festivities. Sangeetha upanyasam was performed by Kum.Renu Karthik of Dallas GOD Satsang, followed by Varun Ravi’s beautiful exposition of Srimad Bhagavatham. A Kuchipudi dance recital was offered to the divine couple by Kum.Vaathsalya Senapathi. In the evening Sri Ramanujamji elaborated 6th, 7th and 8th Canto, and extolled the devotion of Prahlada. After mahaprasad dinner, the devotees were served with a feast to their eyes and ears, when the divine couple came on a Garuda Vahana which was adorned beautifully, and stole the hearts of devotees.

November 28th Day 6 of Saptaham
Bhagavatha parayanam continued with Canto 11.Following the lunch session, Ellora center for performing Arts had a beautiful performance .In the evening Sri Ramanujamji explained Canto 8, the Manvantaras and the concept of time. He continued with Gajendra Charithram, Mahabali charithram, Vamana avataram in his own unique way, thus making the devotees experience the nectarine that is indeed the lord himself.
After mahaprasad dinner, devotees assembled for Janavasam, where the Bride –Sri Madhuri saki and the Groom- Sri Premika varadan playfully exchanged garlands. The joy of devotees knew no bounds as they were able to witness this divine Janavasam. Satsang children played different western instruments to the tunes of Krishna. The day culminated with Dolotstavam and the devotees were looking forward to the wedding ceremony the next day.

November 29th Day 7 – Radha Kalyanam and Anjaneya Utsavam
The day started with Parayanam, and the devotees started filling the hall completely and the summary of the entire Bhagavatham was recited ( Canto 12- Chapter 12) . The divine couple were getting ready for their wedding ceremony, Ashtapadis were recited and the union of Premika varadan and Madhurisaki which is nothing but the union of Jivathma with the Paramathma was witnessed by the blessed devotees. Women and children did the traditional kummi ( dancing around the Lord by clapping hands rhythmically) and all the traditional ceremonies took place. A grand mahaprasad lunch was served to devotees on banana leaf in a traditional manner and the lunch prasad was sponsored by Sri Guruvayurappan temple. The entire atmosphere was filled with divine bliss, the sun was shining outside and Lord Guruvayurappan blessed the entire event. In the evening Natyanjali Kuchipudi Dance School offered their talents to the divine couple. Sri Ramanujamji continued with Krishna Katha .
Anjeyana Utsavam was celebrated for the ever humble great Rama baktha. After mahaprasad dinner Sri Swamiji’s kirtans were rendered and Dolotstavam was performed for the divine couple.
Dallas Bhagavatha Sapthaha Mahotsav was a grand celebration which was made possible due to the causeless mercy of Sri Guruvayurappan and the temple authorities. The newly built temple cultural hall was inaugurated by performing the Bhagavatha Sapthaham which truly is not a coincidence but indeed the Lord’s will. The temple authorities were kind enough to provide all the facilities required for conducting the 7 day program and they also sponsored Dinner and Lunch prasad. Many devotees from greater Dallas area sponsored Lunch and Dinner mahaprasad. The Dallas satsang family grew bigger this time also and as Sri Swamiji says it is indeed all the Lord’s will and grace and nobody can deny that. 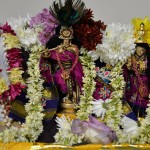 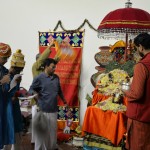 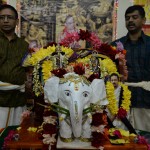 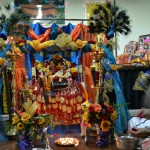 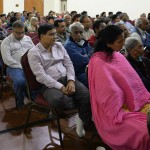 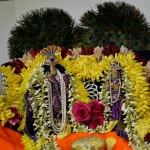 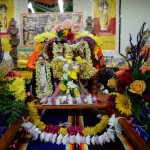 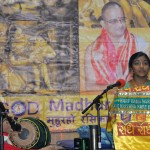 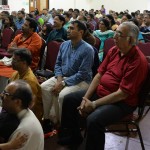 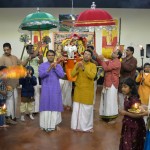 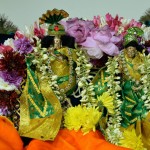 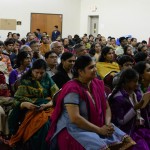 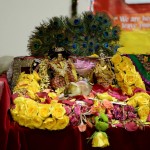 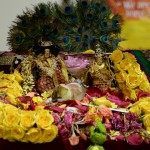 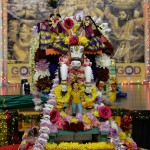 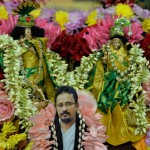 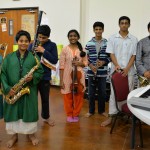 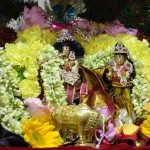 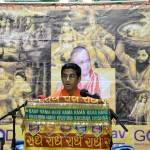 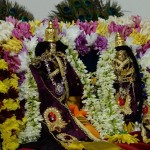 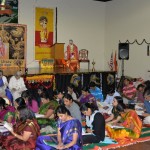 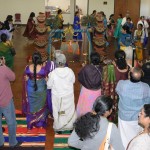 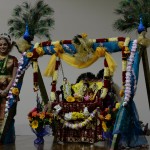 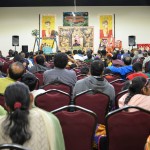 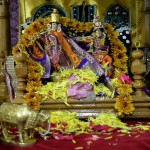