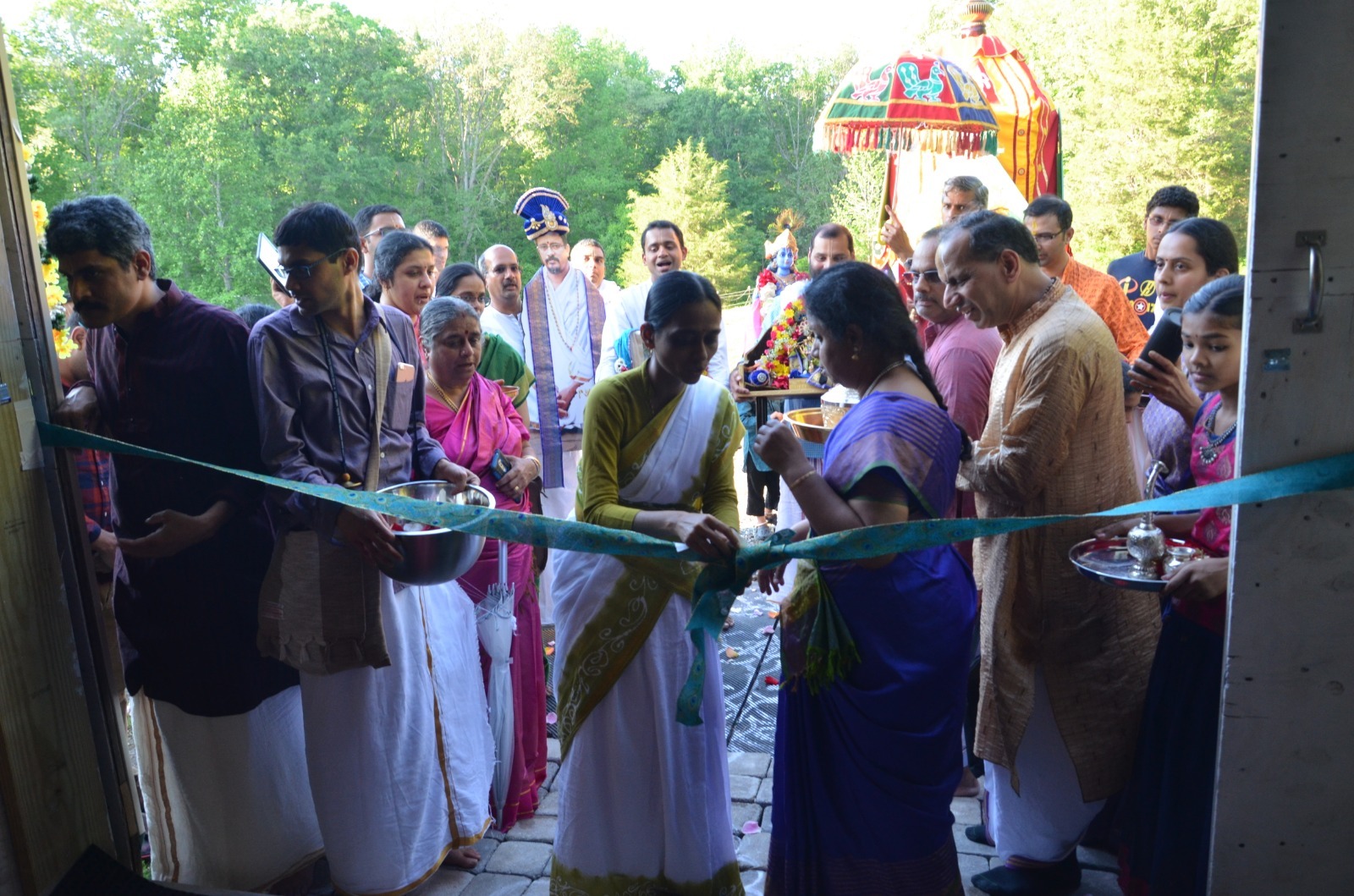 By Sri Swamiji’s abundant Grace, and the blessings of Madhuri Sakhi sameta Sri Premika Varada Thakurji and Sri Jagannath Parivar, It was a divine three days of GOD Utsav, Krishna Leela Sthala Sri Brindavanam celebrated at Virginia Namadwaar, GOD, led by Sri.Poornimaji. The Utsav was supported by Houston Sri Ramaswamiji. A grand Utsav well attended by devotees from around the US and Canada, left all of them with a unique anubhavam like never before.

The Utsav started on Friday, May 3rd evening with Mahamantra Kirtan. while the devotees were chanting the Mahamantra, the embellished Ratham was ready to take our Madhuri Sakhi sameta Sri Premika Varada Thakurji and Sri Jagannath Parivar for their Nikunj Pravesham. All the deities and holy Padhukas were placed in the Ratham. The procession started from the Namadwaar with all the devotees dancing and singing the divine names. Madhurageethams, Namavalis were also sung.  The Ratham reached the newly renovated hall for the utsav where a fully adorned Nikunj was ready for their Pravesham. Sri. Poornimaji un-tied the ribbon and after the arthi the deities were brought inside. There was a surprise shower of flowers for them, from the ceiling as they entered the hall. After entering, they were placed in the Nikunj, Maha arthi was performed and dinner prasad was served.

After dinner, Sri Krishna Janam and Nandostavam were celebrated. Srimad Bhagavatha Dasama Skandam, Krishna Jananam was recited. While reciting, the anukaranams of all the incidents in the slokas were enacted, like Devaki’s wedding procession, and their imprisonment. and then after the birth of Sri Krishna Vasudeva carried him to Nandababa’s house and brought back yoga Maya. This was followed by the joyous Nandostav. The devotees happily splashed curd and milk on each other chanting the divine names and dancing around the cradle where baby Krishna was lying. Around 100 devotees participated and enjoyed the evening Utsav. The first-day event concluded with Dolostavam and Arthi. 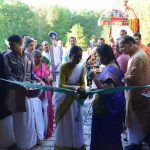 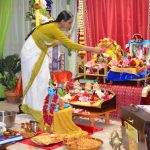 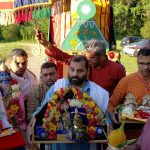 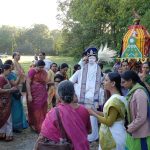 By Sri Swamiji’s abundant Grace, the day 2 Utsav was a very divine and exciting experience for the devotees. The second day Utsav started with Prabodhanam and Alankaram for divine lordships. while the devotees were chanting the Maha-mantra, preparations for the Brindavana Yatra were going on. The divine couple were ready for their purapaadu. the yatra began with kirtans and HIS names echoing all around the place. All the men were dressed as gopas, wearing leaf Malas and carrying sticks for grazing the cows during the Yatra.  Anukaranams of different Asura vadhams Trinavarta, Vatsasura, etc were enacted on the way. Ee reached the river banks, where Krishna had invited all his Gopa friends for Vanabhojanam. The devotees enjoyed a vivid Pravachan of the Sri Krishna Leelas by Sri Poornimaji. Madhura Geethams and Namavalis were also rendered. After the Pravachan, it was fun and frolic all around with the gopas playing the traditional games that Krishna played with his friends like, kabbadi, gilli, marbles, running race, sack race, ball games, jumping games etc. after the games the children enjoyed the curd rice Prasad. Then Sri Poornimaji delivered a Pravachan on Bramha Mohana Leela. Lunch Maha Prasad was served. After the lunch, there was Navaneetha Chowriya Leela, hiding little pots filled with butter. The children enjoyed locating the pots with our Takurji and relished the butter prasad. Then the divine couple was brought back to the Nikunj and the morning satsang concluded with Arthi.

The evening satsang started with Maha mantra kirtan. The devotees joined with Sri Narayananji from Boston in the Kaliya Nardhanam parayanam from Srimad Bhagawatham. He also expounded the Kaliya Nardhana Leela from the scripture. An extempore dance performance for the Madhura Geetham,” Thaiya thigu thigu” was performed by Mahima Murali, This was followed by Anukaranam of Govindha Pattabishekam. Slokas from Srimad Bhagavatam were recited and Madhura Geethams were also rendered. Sri.Poornimaji gave an eloquent discourse on this magnificent leela of Lord Sri Krishna. This was followed by the offerings to Govardhana mountain and a wonderful form of Lord Krishna holding the mountain was decorated with Rice, fruits, and nuts. Indrastuthi was rendered and anukaranam of Indra crowning our Premika Varadhan- Govinda Pattabishekam was enacted. All the devotees present there did the Govardhana parikrama singing and dancing around the divine couple with bliss. It was truly a divine experience to be a part of the Govindan’s kudumbam. Dinner Mahaprasad was served. After dinner, there was Madhura Dhuni- Camp fire, a first of its kind. All of us, children of our beloved Sri Swamiji, gathered around the campfire with hearts filled with gratitude to reminisce the abundant Grace showered by Him. The satsang concluded with Dolostav. around 100+ fortunate devotees attended the second day Utsav. 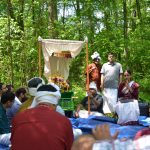 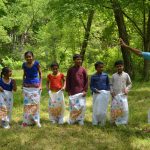 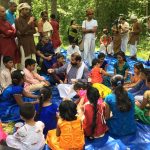 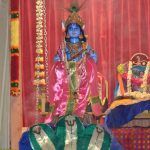 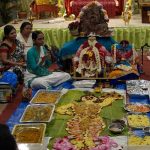 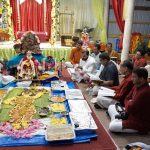 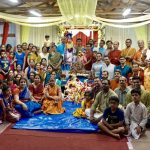 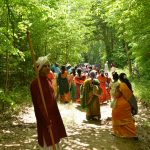 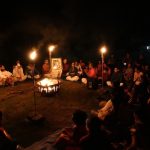 By Sri Swamiji’s abundant Grace, the concluding day of the grand GOD Utsav was yet another memorable day. The satsang started with Mahamantra Nama Sankirtan. We had the Gopakuteeram kids play.

dharma. The children eagerly participated and were enthusiastic to answer. After the quiz, we had a very young Bagawatha Mohana Krishnan from Boston (7years) doing a pravachan on Krishna Leela.

The Virginia Gopakuteeram Children play titled “Bharath pradhakshina and Nama Mahima” was staged. It briefly explained about all the saints from different parts of India and how all of them exhorted Nama Sankirtan as the easiest path to attain the Lord in this Kali Yuga and, also how Nama gives us health, wealth and satvik mind and much more. At the end of the play, young children danced for the Mahamantra song in 16 languages.

After the play, we had a mass prayer with Sri Poornimaji and Sri Ramaswamyji. it was an energetic session with all the attendees participating in the chanting. The entire hall was reverberating with Nama. Chappan bhog with many varieties of food were offered to the deities.

The Mahamantra prayer session was followed by Jagannatha Rathosav. The decorated Rath was ready for our divine couple and Jaganathji parivar. As the Rath started devotees eagerly pulled the chariot. Mahamantra kirtan, Namavalis, and Madhura Geethams were rendered and all gleeful devotees were dancing and singing around the chariot. The Rath was brought to Namadwaar. After Arthi the deities were welcomed into Namadwaar.

This was followed by Anjaneya Utsav. Madhura Geethams on hanumanji were sung. Hanuman Chalisa was recited. Prasad was offered to the deities. After vidayarthi, the satsang concluded with Kaliyayum bali kollum kirtan.

Humble pranams to all the volunteers whose tireless efforts made this Utsav a memorable. Prayers at the Lotus feet of Sri Swamiji and Takurji to keep blessing us with more and more memorable satsangs and Utsavs. Also thanking Sri Poornimaji, Sri Ramaswamiji and all the other outstation attendees who had traveled afar for this Utsav and making this a grand success. 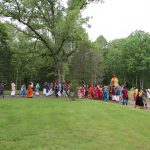 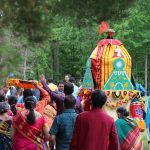 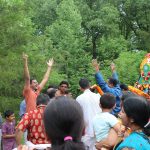 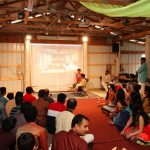 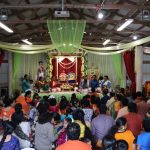 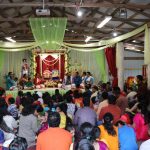 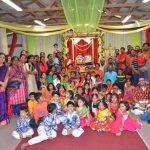 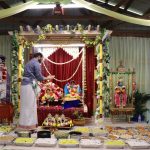