Bhagavatha Parayanam took place at the residence of various devotees in the morning. Sri Ramanujamji led the parayanam and covered various cantos including canto one, Krishna Jananam, Govinda Pattabhishekam and Rukmini Kalyanam.

In the evenings, the celebrations commenced with a Ratha Yatra featuring various vahanams including Hamsa, Gaja, Ashwa and Garuda. With Sri Swamiji’s grace, the Ratha Yatra was uninterrupted by rain, which is miraculous given the rainy nature of the Greater Seattle area during the month of December. The Ratha Yatra was followed by performances by local artists and schools. Performers included Ms.Anuradha Shenoy, a student of the From Within Academy doing a Bharathanatyam performance, Ms.Radha S from the Urvasi Dance School giving an Odissi performance on Madhurashtakam and students from the Basuri and Tabla School doing a tabla and flute combined recital.

Sri Ramanujamji’s lectures followed these performances and filled the ears and hearts of all the listeners with the nectarine stories of Krishna. Topics included an introduction to Bhagavatham, Krishna Jananam followed by Nandotsavam, Damodara Leela, Govinda Pattabhishekam and Rukmini Kalyanam. The listeners were captivated and were yearning for more of Sri Ramanujamji’s pravachans. This was evident from the returning audience and the growing crowd over the course of the seven days. On the seventh day, Sri Ramanujamji was honored by the VEDA Sri Venkateshwara Temple board members and priests.

Radha Kalyanam was yet another beautiful event where the divine couple were married in a divine unison to the blissful rendering of various ashtapadis on Sunday, December 14th at VEDA temple. The day had a packed agenda with Unjal utsavam, Divya naamam, Tulasi pooja and Hanumath utsavam. Some of the Gopakuteeram children also took part in singing a few namavalis during the divya naamam. All devotees then had a close-up dharshan of the divine couple and obtained the blessings of Sri Swamiji and the divine couple. Lunch and seer bhakshanam were served to all the attendees. Close to 75 people attended the divine wedding. 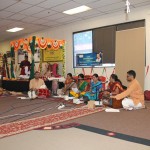 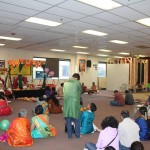 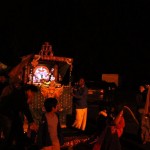 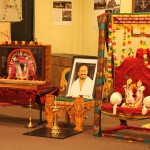 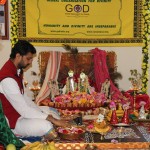 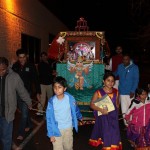 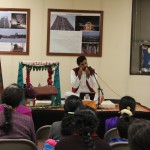