Redding GOD Chapter could see so many blessed souls that experienced this kind of event for the first time, going home with a newfound respect for Sri Swamiji and the Mahamantra. NarayananJi started the parayanam on February 20th and involved each one of us in reading the verses from Srimad Bhagavatam. It was so interesting and blissful to understand certain verses with NarayananJi’s explanation from Sri Swamiji’s pravachanams. Every evening for 7 days, we were blessed with Srimad Bhagavata pravachanam by Sri NarayananJi.

It was very clear that everyone enjoyed the discourses as they sat through the entire 2 hour span of the talk. On most of the days, a brief explanation of GOD, why Mahamantra, to the audience was done. We had the opportunity to show the 3 minute video of our Ashram to the audience. They were briefed about Gopa kuteeram, e-GK, Friday telecon satsangs, daily 12 hour relay nama, Houston NamaDwaar, Bay Area God Satsang, yearly satsangs by disciples of Sri Swamiji and how we all can partake the divine opportunities.

Anand RajappanJi and AnushyaJi with little Krishna Pranami lightened up the event further. SreeSudhanJi and RamGopalji from Bay Area joined during the weekend with RamyaJi.

Smt. Jyotsna and Dr.Ravi Tripuraneni, the anesthesiologist, hosted Shiv Rathri satsang at their residence which was well attended.

Smt.Yasodha and Dr.Nanda Kumar and their daughter Dr. Sushma Nandakumar hosted the Govinda Pattabhishekam / Annakoototsav and Nikunjotsav at their residence. It was a moving experience. The folks were completely enthralled at the divine ambi-
ence there. A stage was set where we could see the real Govardhana Giri, with Airaavadham offering flowers to the
Lord, thanks to Sri NarayananJi’s Bhakti bhavas in using the available resources making a beautiful sanctum sanctorum .

RamyaJi drove down and gave a mellifluous rendition of Sri Swamiji’s and Thyagaraja’s Keerthanas to a cosmopolitan audience that
sent them to 45 minutes of pure bliss. Dr.Nandakumar felicitated Sri NarayananJi with Thirumala Perumal Shawl as a honor. Mohana Krishnan being a mere 5 year old was reading Bhagavatam in Sanksrit, and also sang several Sri Swamiji’s keerthanas. He also gave us a 10 minute pravachanam on Chaitanya Mahaprabhu’s lifesketch. Krishna Pranami also joined him. Purushothaman gave excerpts from Sri
Krishna jananam. Krishna Prasad talked about the story of Kalidasa. Parayanam Poorthi was done on Sunday before Radha Kalyanam and Theertha Prasadam was given to the families that hosted the events. Many wanted this to be an annual celebration and started already volunteering for such events to be held at their respective residences.

Smt.Kausalya and Dr.Ravindran, hosted Radha Kalyana Mahotsav followed by Hanuman Utsav at their residence. This event was attended by at least 40-50 bhaktas. The passionate manner that NarayananJi conducted the divine wedding moved many to tears amidst the newfound joy witnessing the grandeur. Each of the families contributed their part for Radha Krishna Vivah. The children and teenagers were equally enthralled. The host’s children Ms.Sheetal and Mr. Akhilesh sang and played piano for ‘Jai Jagadeesh Hare’ and ‘ Achchutam Keshavam Krishna Damodaram’.

Hanuman Chalisa was recited 11 times after the divine wedding. A vadai garland was offered. Also a garland made of Hare Rama Mahamantra was written by every one of the 40 odd people that attended the utsav and offered to Hanumanji. This was followed by the concluding pravachanam by Sri NarayananJi enlisting the vision of Sri Swamiji to the sizable audience.

The most noteworthy incident was the blessing from Sri Swamiji via Sri RamanujamJi right at an atomic time of the end of Sri NarayananJi’s discourse ‘Nama sankeerthanam yasya sarva paapa pranaasanam..’ which raised several avid listeners’ eyebrows and caused gooseflesh in many. We also had a drizzle after the event.

With heavy hearts the event came to an end, with recital of Vishnu Sahasranamam. Anega koti namaskarams to the Lotus Feet of Sri Swamiji for giving us this blissful experience sending his ardent disciples here. It was a Golokam here. We suddenly feel that Sri Swamiji’s blessings have been showered in Redding and we sincerely hope that this community gets the continued blessings of regular satsangs and more such utsavams. 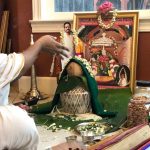 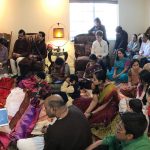 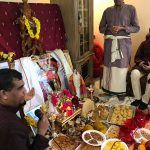 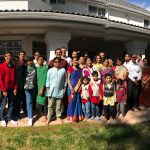 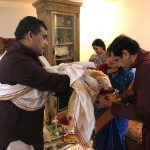 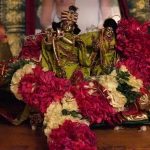 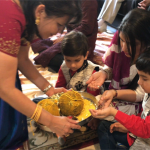 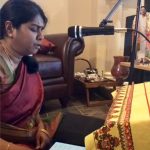 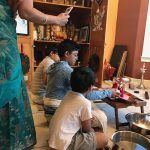 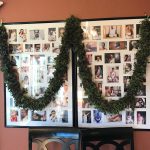 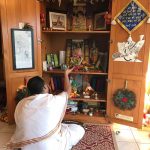 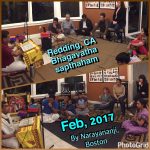 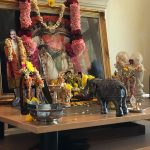 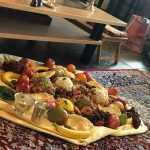 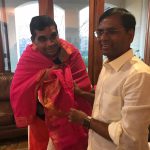 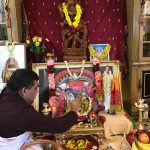