Being in a kingdom is so joyful.
Being in satsang is divine. Being in the kingdom of Krishna Bakthi is blissful. Dallas Fort Worth residents enjoyed that bliss between April 22nd and 24th and continue to cherish those memories, The discourse by Sri.Poornimaji (Disciple of HH Maharanyam Sri Sri Muralidhara Swamiji) on Krishna Bakthi Samrajyam, moved everyone who entered into the kingdom by a few steps towards Krishna Bakthi and Guru Bakthi. Vasantha Utsav 2016 took place in a grand manner at DFW Ektha Mandir, were about 200 Bhagavathas were blessed with Krishna Katha.
Day-1
The first day started with Sri.Poornimaji explaining about Krishna Bakthi Samrajyam, a beautiful kirtan composed by Our Sri Swamiji himself, about Krishna’s kingdom of Bhakthi. Who can be more qualified in Hari Bhakthi than the Lord Brahma himself and his mind son Sri Narada Maharishi. We entered into the kingdom through the Katha of Sri Narada maharishi and how he took avatars as Purandara Dasa and Ammalu Ammal to show us in this Kali yuga that Krishna bakthi can be done in this time and age, and its easier with a Sathguru’s grace.
Day-2
On 23rd Saturday, youth center was filled for the discourse on Baktha Meera, who was none other than Champaka latha one of the eight friends ( Ashta Sakhi) of Krishna and her steadfast devotion towards Govardhanodhari through various trials and tribulations stands as proof that mundane sufferings cannot diminish Krishna bhakthi, instead they add more faith and love towards Him. Sri.Poornimaji’s rendention of Baktha Meera’s kirtans moved everyone closer to Krishna.
Day-3
Sunday (24th), our G.O.D Gopa kuteeram children rendered Madhuragitam, kirtans composed by Sri Swamiji, the sweet notes and easy to understand lyrics which had profound meaning was preparing all of us for what was about to come, Yes, Kaliyuga avatar of Sri Radha Rani, the epitome of pure love, descended as Andal , who protrayed the peak of the Bakthi Vaibhava and how she married Lord Ranganatha and became one with Him in Srirangam. Sri.Poornimaji took all of us to Srivilliputhur and then to Srirangam where each and everyone of us witnessed the epitome of krishna bhakthi and this divine discourse left all the 250+ bagavathas in tears.
All the three days, dinner Mahaprasad was served by our volunteers. We are so thankful to the DFW Hindu Temple for providing the youth center for the discourse.
Also, on 23rd Morning Radha Kalyanam took place at Sri Sridhar and Smt. Saraswathi’s residence followed by Poornimaji’s discourse. On 24th morning, GOD members were blessed with boat ride with the divine couple Sri Madhuri Saki Sametha Premika Varadan and Sri.Poornimaji , celebrating nauka utsavam in Lake Lavon for 3 full hours, singing kirtans and being transformed as Gopas and Gopis of Brindavana. Though the Utsavam lasted for only three days, but it gave everlasting bliss and glimpse of Krishna Bhakthi Samrajyam, prayers at the lotus feet of Sri Premika Varadan and Madhurisaki and Sri Swamiji to bless us with more satsangs through which we are assured of citizenship in His kingdom. 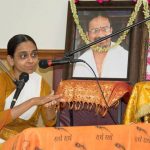 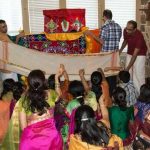 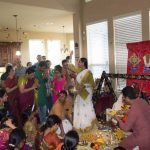 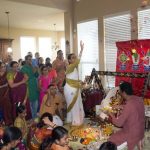 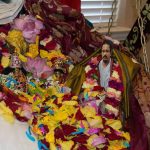 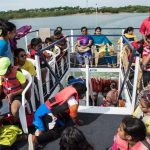 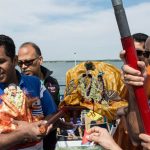 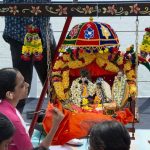 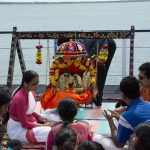 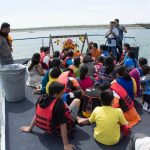 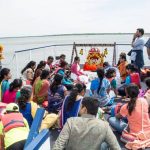 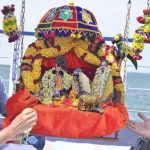 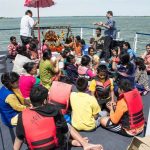 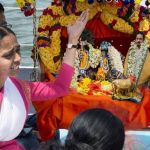 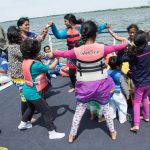 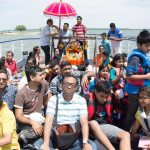 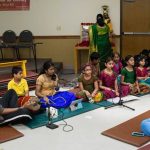 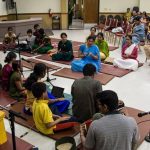 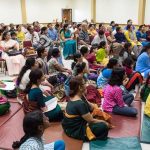 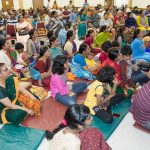 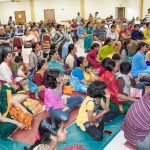 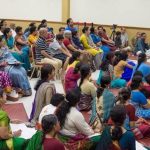 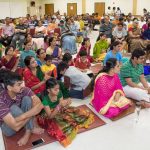 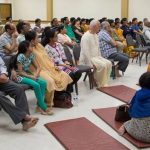 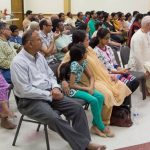 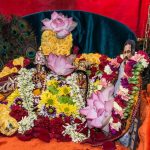 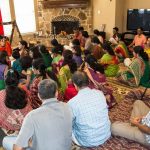 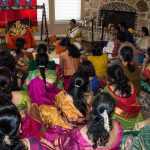 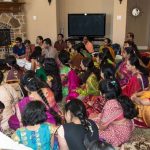