The following article is by Thaegeswi Balaji from Tampa, FL. We just celebrated Rama Navami this month and hence, presenting below the story of Mother Sabari from Srimad Ramayanam. 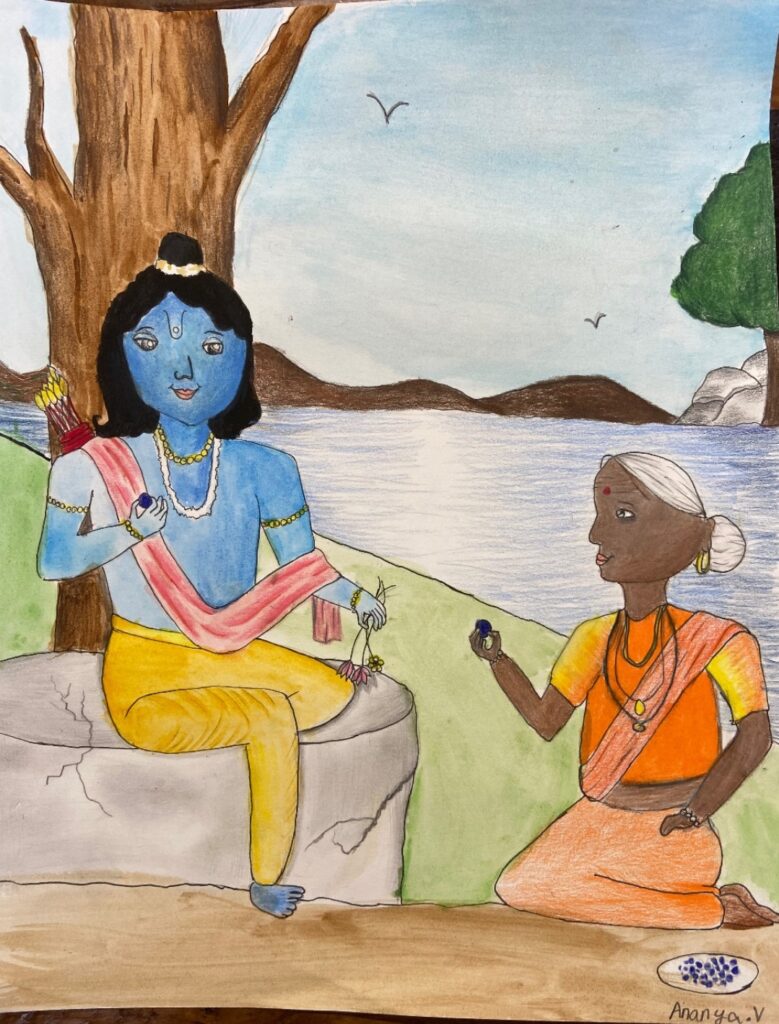 One day, as she was walking in the banks of Pampa river, she suddenly felt something change in her, not physically but internally which she could not define. She miraculously felt a peace of mind and joy which she had never felt before. All she knew was that she just liked what she was feeling. She was looking around to see what made her feel like that and found an ashram of Mathanga maharishi. Mathanga maharishi was a great mahatma. She had the first darshan of Mathanga maharishi as he finished his daily rituals in the Pampa river and was walking back to ashram. The moment she saw him it struck her that it was the presence of Mahatma that was giving her joy. Once she got the taste of it, she didn’t want to leave anymore. She wanted to be with him but did not have the courage to go near him and serve him. She had already mentally accepted him to be her Guru and wanted to be around the ashram in some way or another. She used to secretly clean the path from the river to the ashram and bring fruits and flowers for the Mahatma to do pooja.

One morning Mathanga maharishi found out that someone was cleaning the path that was thorny and something felt very different to him. The path was completely spick and clean. He then asked his disciples who had cleaned it. They said they did not do that kainkaryam and they were not aware who did that. Mathanga maharishi told the disciples to go find out who was doing it. The disciples eagerly waited to figure out who was behind this and found Sabari hiding and waiting. As they watched, she then nicely cleaned the path. They then caught hold of her and told her that the maharishi was calling her. Sabari was frightened and said if she did something wrong, she was very sorry and would run away from the area and would never come again. They took her to the ashram, and she had darshan of her guru for the first time in that proximity. She was so happy that she could not speak or say anything. Mathanga maharishi asked why she was doing this and if she had any prayer that needed to be fulfilled. Sabari, being the humble person who she was, said she didn’t want anything and that she would do whatever her Guru told her to do. Hearing this the Maharishi was very pleased and said that she could do what she was doing confidently with no fear. Sabari felt so happy when she was near her Guru and doing service for him.

Years passed by and one day Mathanga maharishi decided to go back to his divine abode and quit his body. He called all his disciples and wanted to grant them whatever they wanted. Each disciple asked for different things. One asked to find treasures and be rich, another asked for a child, and another asked for yoga siddhis, etc. When Sabari was called, she said she didn’t want anything. She said that she would not be able to bare the separation from her guru.

Seeing this the Guru felt so happy and called her near him. He told her that she was the right recipient for Tharaka mantra. He whispered “Rama Rama Rama” in her ears. When Sabari asked for the meaning of this, he told her not to worry about it and said that the meaning will come knocking on her door one day.

She began to chant the divine name of Rama constantly because her Guru had told her to. She waited for Lord Rama to come to her door. She knew he would come because her Guru had said so. Years passed. Every day she would ask the children playing outside if someone had come to see her. She would go to banks of Pampa river and pick the best fruits there, waiting for Rama to come. She continuously did this for 13 years, not even missing a day.

One morning, the people who were once the kids she used to ask earlier, came running and said someone really wanted to see her. Bhagavan Rama and Lakshamana had come. Sabari humbly invited them inside, washed their feet and gave them the fruits she had picked that day. Now the specialty with these fruits was that when she picked the fruits, she would take a bite out of it to see which ones were raw or ripened. And the freshly ripened ones were the ones she kept. Rama very happily took those fruits and blessed Sabari. Sabari also showed Rama and Lakshmana her Guru’s ashram and spoke constantly to Them about her Guru.

Then, with Lord Rama and Lakshmana’s permission, she said she wanted to go to her Guru’s abode. Sabari sat down, continued to chant Rama Nama, fixed her mind on her Guru, and left the body to join her Guru at his divine abode, with Lord Rama as the witness.