This series chronicles sweet experiences recounted by the devotees of HH Maharanyam Sri Sri Muralidhara Swamiji as well as some divine experiences of Sri Swamiji himself. These articles are translations from the series, “Madhuramaana Mahaneeyar” that is published every month in Madhuramurali Tamil monthly magazine. 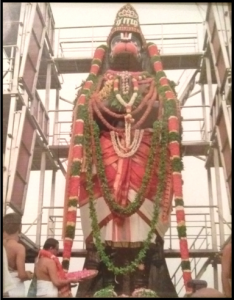 Once in Madhurapuri Ashram (near Chennai, India) Sri Swamiji was performing pooja to Madhuri Sakhi sametha Sri Premika Varadan as usual. After finishing the pooja, he continued to sit in front of the Divine Couple in deep meditation. At that time, he had a vision of two divine personalities singing the Mahamantra (Hare Rama Hare Rama Rama Rama Hare Hare! Hare Krishna Hare Krishna Krishna Krishna Hare Hare) and dancing blissfully in Bhagavata Bhavanam, the main hall in Madhurapuri ashram. [Later Sri Swamiji said that the divine personalities he had seen were Sri Chaitanya Mahaprabhu and Sri Nityananda.]
After a few days, Sri Swamiji had another vision of some divine women from Goloka (the abode of Lord Krishna) who were also singing the Mahamantra and dancing in bhava in the same place.
From that day onwards, with the Lord’s grace, the Mahamantra has been continuously chanted everyday at Madhurapuri Ashram.
Due to this chanting of the Divine Name, a gigantic [24-ft tall] Hanumanji has come to live at the Ashram. This Hanumanji (Kanyakumari Sri Jaya Hanuman) has been installed with divine, auspicious yantras placed beneath Him. Sri Swamiji while talking about this great Hanumanji says, “He is a boon-giver; keeps married couples in unity, and also blesses them with children; He removes all obstacles, and even one’s enemies; He treats not only physical ailments but mental illnesses too; He will bless us with good health and wealth and a long life; He will re-unite families.”
Let us worship this Hanumanji and attain happiness and auspiciousness in our lives.