Cherished Memoirs: My Guru As I See Him

This series chronicles sweet experiences recounted by the devotees of HH Maharanyam Sri Sri Muralidhara Swamiji as well as some divine experiences of Sri Swamiji himself. These articles are translations from the series “Madhuramaana Mahaneeyar” that is published every month in Madhuramurali Tamil monthly magazine.

I have already written once about a devotee of Krishna, who is living in Kumbakonam named Ammalu Ammal. Widowed at an early age, Lord Panduranga assumed responsibility for her. Sacrificing everything, she went to Pandarpur and did bhajan on Panduranga with resolve. She lived in Pandarpur for about 7 years. Only during the time of war, acceding to devotees’ requests, she came back to Kumbakonam. 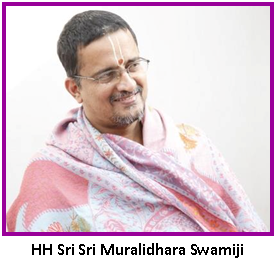 For about 70 years, she has been having only milk, fruits or curd. She is living without even touching rice and neither does she touch money. So far, she has composed about 30,000 kirtans in her mother tongue, Kannada. These kritis were not composed using intellect. These types of kirtans come up intuitively. Initially, these songs emerged with dance form. Every composition comes with the stamp of  “Ammalu priya” as well. Every kirtan is so full of flavor and the rhythm is very beautiful too.

Songs have emerged about all deities. But Bhagavan’s seal of approval could not be obtained to publish these. In her kirtans, the significance of the holy kshethra and the magnificence come out by itself. Her bhajans are devoid of beat and raga alapana but full of emotion. Our Sri Swamiji had the desire of our Srinivasa Perumal and Premika Varada listening to this bhajan. Our Perumal also looks out with the yearning of listening to someone doing bhajans. HE is so happy to see Bhagavathas.

This supreme devotee, who has never done bhajans outside, came to our Perumal’s Sannidhi and did bhajans. Since our Srinivasa Perumal is a deity of Yoga, a kirtan emerged full of obstinacy. Another kirtan emerged related to our Premika Varada, describing His childhood leelas. Premika Varada plays His flute and mesmerizes one and all; HE wants brand new vastras everyday, specifically with long zari borders and insists on it to Yasodha, also emerged.

Premika Varadan, after grazing the cows and eating the food given by Yasodha, He drinks the water from Yamuna with HIS hands. It is not because HE does not know the etiquette. If HE uses a jug or a vessel to drink water, Yamuna Devi will regret that she did not get the touch of Krishna. That is why HE uses HIS hands. Such were the songs! Several such childhood leelas have also come up in this kirtan.

From that day onwards, butter is offered to Premika Varada. The vastra that was worn once is not offered the next day. Ammalu Ammal is a recipient of ultimate grace of Kanchi Maha Periyava, Sri Chandrashekarendra Saraswathi.