Cherished Memoirs 12 – “Knock, And It Shall Be Opened!”

This series chronicles sweet experiences recounted by the devotees of HH Maharanyam Sri Sri Muralidhara Swamiji. These articles are  translations from the series, “Madhuramaana Mahaneeyar” by Dr. A. Bhagyanathan, personal secretary to Sri Swamiji, that is published every month in Madhuramurali Tamil monthly magazine. 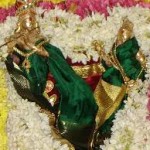 The ever compassionate Bhagavan blesses all His devotees through His divine leelas. Just like the deities of Guruvayoor, Pandharpur and Udupi, Sri Premika Varadan (Lord Krishna at Sri Sri Muralidhara Swamiji’s Madhurapuri Ashram) also performs divine leelas and rushes to the side of His devotees when they are in trouble.

A few years ago while speaking to all the Namadwaar volunteers, Sri Swamiji made this prayer unto Premika Varadan,  “Krishna! Volunteers in different corners of the world are working tirelessly to fulfill my desire of spreading the Mahamantra far and wide. I want You to take care of them like You are taking care of me.” Our Premika Varadan made true this prayer by enacting His Lila in the life of devotee Mrs. Jayanthi Ramanan.

Mrs. Jayanthi Ramanan and Mr. Ramanan are ardent devotees of Sri Swamiji, and live in Sydney, Australia with their two sons Mahesh and Dinesh, and daughter-in-law Aparna Mahesh. At Sri Swamiji’s behest, they host and meticulously organize programs for visiting devotees from our satsang as well as coordinate local satsang programs.

Jayanthiji, who works for a multi-national company, was working from home that day. She was alone at home and was being extra careful to answer all emails and phone calls promptly as she was working under a new manager.

It was almost 10 am and was getting hot outside. Jayanthiji decided to park her car inside the garage. Jayanthiji remembered to carry the front door key as her husband always reminded her to keep the key with her while going outside the house. She parked the car in the garage and closed the garage.

She used the key and tried to open the front door. But the door would not open. Only then she remembered that the door was bolted inside and so could not be opened from the outside. As she had already closed the garage door, she could not enter through that way either. She was locked out!

As she was desperately searching for a way to get in, her phone began ringing inside, and continued to do so. She was helpless. She knew it was probably her new manager trying to reach her. And now that she did not answer the phone, he would think that she was out shopping! Her fear and helplessness grew stronger by the minute. She didn’t have her cellphone on hand, so she could not even inform the manager about her situation.

Desperate, she remembered Sri Swamiji saying that Sri Premika Varadan would rush to His devotees’ side. She prayed to Premika Varadan, “Premika varada help me, show me the way.” Then she started to sing Sri Swamiji’s prayer kirtan fervently, “Indru pol endrum enai nee kaathida vendum, Premika varada! Thoonai pilanthu vandhu baalakanai kaathaai, pethai enai kaappathum nin kadane!” (Premika Varada, it is You who has to protect me! You [once] broke open the pillar and came to protect the little boy. It is Your responsibility to protect this helpless woman too!)

She continued to sing that kirtan in mind and prayed continuously. Surprisingly, her neighbor came home from work for some reason. She went up to him, explained her situation and using his phone, called her daughter-in-law Aparna (who lived in a different part of town) to bring another key. But as her manager was new, she did not remember his phone number.

It would take her daughter-in-law some time to get there. But time was running out for Jayanthiji. “Premika Varada, help me!” her mind cried out again and again.

Her patience was running out, and soon it gave way to anger. For a devotee, it becomes a chiding mixed with love. She said to Premika Varadan, “How will I answer my manager? I am not a great devotee of Yours like Gajendra, Draupadi or Dhruva. But I don’t have any other choice also. I seek Your compassion. Can You not show me a way out?”

The moment that this prayer was felt very intensely by her, something astonishing happened! A screw that was holding the bolt inside the door gave way; the bolt came loose and the door opened! When Jayanthiji saw this, she was stunned and speechless.

She was thrilled that Premika Varadan had heard her prayer! She was overjoyed that the door had opened! But the greatest joy was in that the Lord had actually showed that He is indeed omnipresent!

Jayanthiji shared this incident happily, when she visited India, at Madhurapuri Ashram in the presence of Sri Premika Varadan Himself.