Gopa Kuteeram kids from San Jose, CA are being taught stories from Srimad Bhagavatham as part of their regular classes and are encouraged to draw what they learned.

Presenting below their write-up and illustration on Gajendra Moksham:

This story takes place in a peaceful place called Trikuta.Gajendra was an elephant king who lived in the forest of the Trikuta Mountains. He was very strong and happy, but he was blinded with his pride. 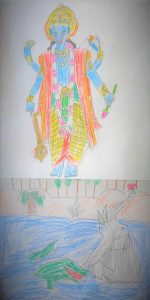 Gajendra and other elephants liked going to a lake near them. But the crocodile, Huhu, felt disturbed by the sounds of the elephants. One day, he felt so annoyed by the elephants and he expressed his rage by sinking his teeth in Gajendra’s foot. Gajendra roared in pain when Huhu bit his foot.He pulled and struggled ,but it was vain against Huhu’s tremendous strength. Some other elephants tried to help, but nothing seemed to loosen Huhu’s grip over Gajendra.

Years went by, and Gajendra was growing old and was losing all his strength. He had nothing to do but pray to Lord Vishnu.He composed this lovely stuthi called Gajendra Stuthi. He also took a lotus and waved it in the air. Bhagavan felt touched by Gajendra’s devotion.It wasn’t long before he came to save him . The Lord took no time to swirl his Sudarshana Chakra at the direction of the raging crocodile, which killed him in less than a moment. Gajendra stumbled on the ground and fell at the feet of his Lord.

Bhagavan told Gajendra about his previous birth. Gajendra was none other than the king, Indradyumna who was a great devotee of Vishnu. He was cursed by Sage Agasthya on account of disrespecting him in his court, pointing out his arrogance. He cursed him to take birth as an elephant for his bad nature despite the fact he was a great devotee.

Huhu also had a story behind him. In his previous birth, he was a gandharva king called huhu. He was cursed by the sage, Devala. When they were both in the water, Huhu mischievously pulled Devala’s legs. This provoked Devala. He cursed Huhu to take birth as a crocodile because a crocodile pulls people and animals without them knowing like Huhu pulled Devala. Huhu begged for mercy. Devala softened a little bit. He said that he would gain liberation at the hands of Bhagavan himself.
Both Huhu and Indradyumna made the same mistake: disrespecting two great sages. This goes to show that we should always respect sages. When Gajendra was helpless, he did Saranagathi and surrendered himself to Bhagavan and at that moment, Bhagavan appeared and rescued him. We should learn from Gajendra’s good deed and pray sincerely and surrender ourselves to Bhagavan. If we do, he will immediately appear and get rid of all hardships.