Govinda’s Family: The Safest Place in the World

The great saint Yogi Ramsuratkumar once said that “Rama Rajyam” (a time when happiness and peace prevailed everywhere) was not far away!

But seeing the state the world is in right now, how can we not help wonder at this? Shootings, attacks, natural disasters, disease, fear, depression, mental unrest everywhere. Where is the peace? Where is the happiness? With no end to all this in sight, how can “Rama Rajyam” be near?

When Indra was enraged by the actions of the Gopas and Gopis, he sent thundering ‘pillars’ of rain and storm with intent to destroy Gokula and Brindavan! 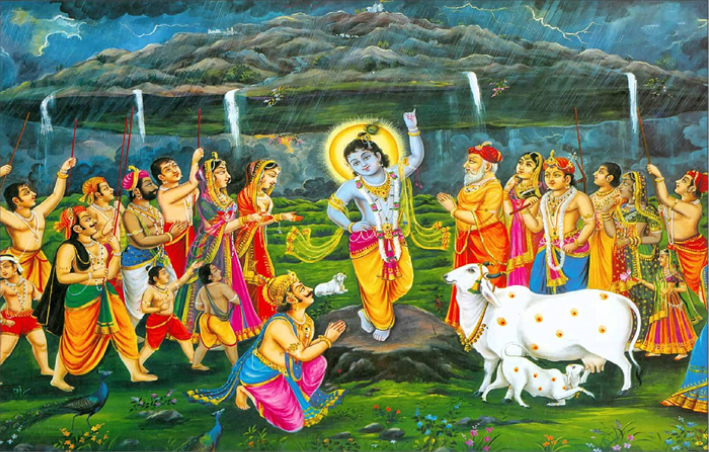 The Gopas and Gopis, who knew nothing other than Krishna, ran to Him for refuge and fell at His feet. Sri Swamiji would say here that the beauty was that not a single one of them blamed Krishna – even in their thoughts, let alone words – for the life-threatening situation they were now in. And when He saw the innocent, complete love and faith of His devotees, Bhagavan Sri Krishna lifted the Govardhana mountain and protected His beloved children. He did not confront Indra or stop the rain, as He could have very well done if He wished. But that was not the purpose then. He chose instead to lift a mountain and give protection to all those who came under it. He was there – the smiling, dancing Krishna, holding the mountain up for their benefit and beckoning everyone to come under it. And for all those fortunate people who went into the protecting arms of Krishna, the seven days and nights of thunderous storms and floods were seven days of happy vacation in Krishna’s presence. Their possessions were washed away, houses were flooded, valuables destroyed. Yet, for the Gopas and Gopis, that week was the most memorable one in their lives, as they were constantly in the presence of Krishna day and night, cooking for Him, feeding Him, singing with Him, dancing and playing with Him. In fact, saints say in a light vein that they were quite sad when the rains finally stopped and they had to go back to their homes as now they would not have the constant Krishna darshan that they had enjoyed all this time.

The annual Madhura Utsav at Houston Namadwaar just concluded in Houston, Texas, USA (Dec 2015). This grand event is attended every year by satsang devotees and families from all over the USA – devotees for whom chanting the Mahamantra, listening to Krishna’s stories, singing for Krishna, chanting verses from Bhagavatam… is simply a way of life, no matter where they work or what they do in life. They may be managers, engineers, consultants, doctors, homemakers, teachers, analysts, directors, entrepreneurs but bhagavata dharma (that includes all the activities described above) is part of what they are; it is how they live. This is how they have been graced by their father, benefactor, Guru – Sri Sri Muralidhara Swamiji.

They all live to serve Bhagavan. They do their humble, little kainkaryam (service) – whatever it may be – without a word or even thought of complaint or dissatisfaction; they speak constantly of their Guru and reminisce God’s grace in their lives; they connect with each other instantly through an invisible divine bond, though many of them barely knew each other before. And the children of all ages are a joy to behold: Teenagers speaking among themselves, of their own accord, about the Guru and about God; Little ones taking part in fanning the Lord, helping in making garlands, chanting Bhagavatam stutis beautifully, singing kirtans melodiously. And even while playing… naturally playing Krishna games, drawing Krishna pictures, humming Krishna namavalis as they go about… simply accepting Krishna and Guru as a fact of their lives. How beautiful is that! Is it not reminiscent of “Rama Rajyam”?

It is such families (who are there all over the world) that are all Krishna’s special children – those for whom Bhagavan will do anything… even lift a whole mountain!

For those who can perceive, these devotees’ lives are an inspiration. Are these devotees exempt from the ills of the world? Not at all! They have come face to face with serious and fatal diseases, chronic illnesses, loss of dear ones, life-long arduous care of disabled family members, have had homes hit by floods and other disasters, lost possessions and money, faced trying situations at work and with relationships… they are not exempt from any pitfall of the world. Yet whenever there is strife, they stand protected under Krishna’s safe mountain. Always. Divine Grace never fails.

They may face periods of worry and anxiety, but in the end, they always come out stronger than ever in their faith. The experience then becomes another sweet memory of the Guru’s and God’s grace, a madhura-smriti! And the conviction that whatever happens in their lives is divine grace continues to grow stronger every day.

Such devotees are Govinda’s very own family. For them, this world is indeed under Rama Rajyam!

But when the whole world is suffering under blows of this terrible Age, how is it that just these fortunate few have found protection under Krishna’s mountain? The answer is simple: Nama and satsang – kirtanam and shravanam. Somehow they heard about the Divine Name and began to chant it. And they had satsang with a sadhu, who spoke about Krishna and sparked their interest, leading them to the Guru. These simple two ways are the ones that have led them to this greatest protection, whether they wanted it originally or not. They may not have chosen consciously to be a part of Govinda’s family. Govinda simply made them His, because He was pleased with them.

Govinda’s safe mountain beckons everyone. The path is lighted by the Divine Name.

One Response to "Govinda’s Family: The Safest Place in the World"