Gratitude to the Guru 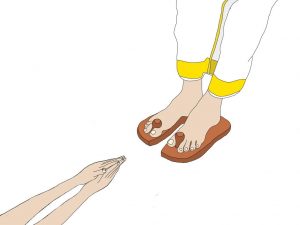 Every relationship in this world is based on expectation. Father expects son to be well-behaved, well-educated and grow into a good individual. Teacher expects the student to excel in his studies. Manager expects his team members to complete all the work. Workers expect their manager to give them appreciation, promotion and salary increases. Citizens expect from the government and the government from its citizens.

Perhaps if there is one relation that comes close to selfless love, it is the love of the mother. A mother bears the child in her womb for nine months, undergoes a lot of pain during labor and even risks her life to give birth to the child. Once the child is born, she nurtures the child, cleans and bathes him regularly, feeds him and puts him to sleep. If the child does not sleep, she sits with her, soothing and calming her, depriving herself of her sleep, until the child finally goes to sleep. She takes care of the child tirelessly until she becomes an adult. She feels happy when she sees her child settled well in life. She does all this without expecting anything from the child in return. Yet, in her old age, when she has nobody to take care of her, even she becomes a little disappointed with her son or daughter. So, a mother too has some expectations from her child. In this world, it is hard to find a relationship that is completely selfless and has pure, unconditional love as the basis… the kind of love the Gopis had for Lord Krishna.

Unconditional love or prema, is hard to find because it is hard for us to even understand it. Why is it so difficult to comprehend? It is because we have not experienced it. We are able to understand and empathize with others only when we have undergone something similar. For example, we all have experienced headaches or other types of physical pain. So, when someone tells us that they have a headache, we are able to understand it. But this unconditional love is something we have never experienced. So we are unable to comprehend it. Yet, if we are in the fold of a Guru, we are the recipients of such unconditional selfless love, whether we understand it or not.

The Guru, a self-realized soul, who is in blissful union with the Lord, comes down from that blissful state into this world of suffering just to uplift us. Purely, by grace, he comes into our life and he becomes part of our life. He is there with us, guiding us through every aspect of our life, especially during difficult times. In Mahabharata, we see that when the  Pandavas lost everything in the game of dice and had to leave to the forest, their Guru, Dhaumya, was standing there along with them. He accompanied them to the forest and stayed by their side when they were suffering. In a world where everyone leaves a person during difficult times, it is the Guru who is at the devotee’s side, constantly encouraging him, pleading to the Lord on his behalf and helping him out of the crisis. And it does not stop there. What can be said about the inner transformation that happens within, just by his association. And yet, what does the Guru personally get out of this? Nothing! He does this purely out of selfless unconditional love.

To such a guru, what can we ever do in return? In Srimad Bhagavatam, we see that when Rukmini Devi sees the unchavritti brahmana return from Dwaraka and learns that the Lord has come to Vidarbha to fulfill her prayer and marry her (as a result of the brahmana having taken her message to Him), she stands there with joined hands and bows her head, in gratitude.

What else can one do, other than bow down in gratitude, to the Guru – the greatest benefactor who blesses us with the best in both worldly and spiritual life!

In contemporary times, we can see that mahans like Sri Mahaperiyava, Yogi Ramsuratkumar, Swami Vivekananda, Sant Kabir Das, had so much love and gratitude towards their Gurus. Sri Swamiji, in one of the recent Ramayana lectures, shared that Sri Mahaperiyava, even though, had not spent time with his Guru, used to have such love and respect for his Guru, Sri Adi Sankara. He would be immersed in the bhava of his Guru, 15-20 days before the aradhana day of his Guru. Even in his final days, when he was immersed in the Supreme, if someone brought the prasad of Sri Adi Sankaracharya, he would immediately open his mouth and consume it.

Swami Vivekananda too, had so much love for his Guru, Sri Ramakrishna Paramahamsa, that when someone asked him to write the charitra of his Guru, he refused to do so. He said, “I can write my master’s story based on how I see it through my heart, but the world may not accept it. The world cannot appreciate or understand it and I do not wish to compromise. So may someone else write it.”

Similarly, Sant Kabir Das sings in a doha, “Sab dharti kAgaj karu, lekhni sab banray, sAt samunder ki masi karu, guru guN likhA na jAye.” Even if the whole earth is used as paper, all the trees as pens and the water of seven oceans as ink, still it will not be enough to speak the glory of my Guru.

Such is the love and glory of a Guru! What can we do to show our gratitude to our Guru? We can pray to live a life that pleases Him and to be forever blessed to be a worthy recipient of such love and grace!