Why India’s Divine Culture needs to be preserved

Why India’s Essentially Divine Culture Needs to be Preserved 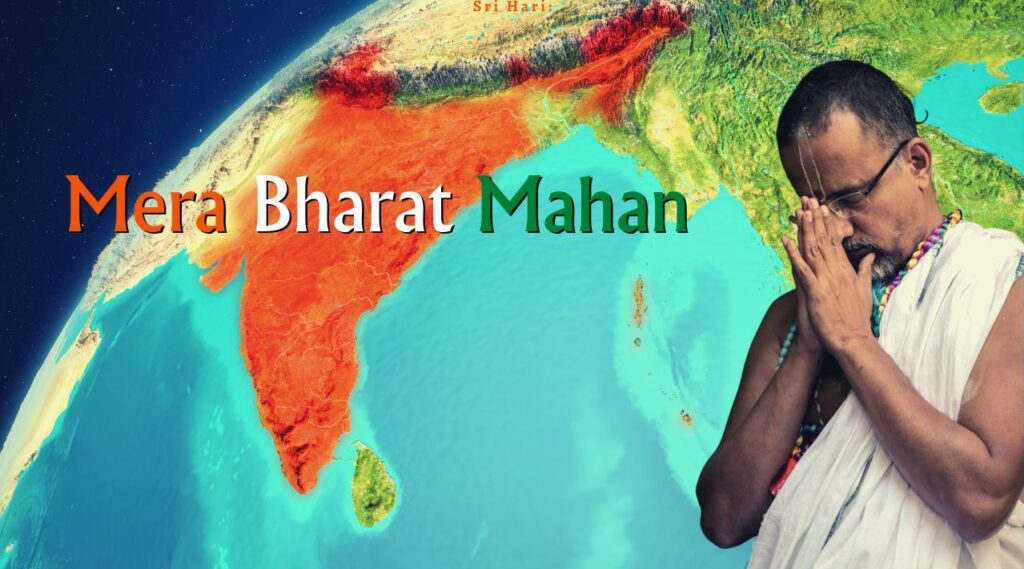 This past year (2021-22), India commemorated its 75th year of independence. Seventy-five years ago, on Aug 15, the land of Bhaarat managed to break free from the shackles of centuries of slavery to begin to re-assert its greatness in all arenas of life, particularly the spiritual arena.

The survival and preservation of India’s divine ethos is essential not simply for its own sake, but indeed for the welfare of the whole world. Sri Swamiji emphasizes this with a lovely example. In a house with many rooms, various family members may be in different rooms. But food for each of them need not be cooked separately in each room. If the kitchen is operational and one person is allowed to cook without hindrance, everyone in the entire house can be fed. Similarly, the world has many countries, lands, cultures. But for each of them to flourish, the real nourishment that is needed is spiritual food. Sri Swamiji says that if Bhaarat (India) lives, and its mahatmas and their works are allowed to live, then the world will live. Because Bhaarat is the ‘spiritual kitchen’ of the world. And the underlying prayer of every spiritual activity that happens in India is “lokA samasthA sukhino bhavantu” – let every living being in this world find joy and happiness – which encompasses the whole world.

In Bharatiya samskriti (Indian culture), the center of the entire life is what it needs to be – Divinity! Everything has evolved from that divinity. Because the center of every individual is not the body, mind, intellect, etc. It is the divinity, which is the Consciousness within! Just like our center is divine, holy and sacred, the central theme of India is also holy, sacred and divine!

India’s essential culture, that is lived and practiced even today, is so steeped in divinity that its every aspect – be it education, fine arts, language and grammar, economics, politics and governance, architecture and city planning, math and sciences, medicine, and even marriage, cuisine, aesthetics and connoisseurship, decoration, etc. – has divine roots, a divine purpose, each originated from a sage (rishi) and has a scripture (shastra) written by them about it.

India’s divine languages came from rishis. The sage Panini’s Sanskrit shastra Ashtadhyaayi encompasses the entire structure of the language in 5000 sutras. A western professor in the US once had tears in his eyes, amazed at the genius of the author of this grammar text who could condense the essence of an entire, extremely complex and advanced language into 5000 short aphorisms. How is that possible? Panini was not a mere grammarian or a linguist, but a rishi. The shastra was the divine product, not only of his intelligence, but also of his immense penance.

All literature of Sanatana Dharma – Puranas, Itihasas (ancient historical texts), and the innumerable priceless literary works of Mahatmas are all divine. The Vedas are timeless! We do not know the upper limit or age of our literature. Estimates such as 10,000 years, etc. are only the lower limit (minimum age)! And these have been preserved over so many centuries, despite the environment not being conducive in several periods of time, because people gave their lives for preserving these! We worship these works because only when there is reverence can these be preserved and passed down generation after generation.

All Indian fine arts came from rishis. Even dance forms are preserved in the form of slokas! Music came from Sage Narada himself. Its highest level is not just as a perfect performing art, but as a ‘nada upasana’, a worship of the divine and the means to Realization!

Medicine and the ‘art’ of surgery has its own divine samhitas that are even accepted worldwide by the medical community as pioneers in the fields. As the world looks to holistic and alternative medicine today, Ayurveda and Siddha systems have always had holistic and ‘upstream’ treatment as their basis, while also aiding a person in their spiritual journey. The works of Indians in the fields of math, science, and astronomy are also well-known and documented, as also their divine connections.

Even the Artha shastra, a treatise on political science that speaks of politics and economics, administration and policy, spies and stratagems, has a section on spirituality and liberation! Ancient cities were planned perfectly around Shiva and Vishnu temples. Architecture was based on vastu shastra, the science of design, layout, space arrangement to enhance divinity and auspiciousness. Weaponry in ancient times was divine and obtained through penance and spiritual strength; mantras played a major role in powering advanced weapons of war (brahmastra, pashupatastra, varunastra, etc.). The art of cuisine has a shastra and spiritual tattva behind it that speaks of foods that are conducive not only for physical health, but also those that are conducive for a sattvic life, for rajasic activities, and which induce tamasic behavior.

Like all the cells and organs of the body, though having different functions, work in unison for the one body and the agent inside the body, similarly in Indian culture all aspects of living are attuned to fulfilling the one goal of enhancing spiritual progress.

Moreover, each of these aspects is also infused with aestheticism and beauty (which, by the way, is a shastra in itself!). Temple towers were not plain but filled with enthralling sculptures each of which had a special significance; a complete meal was balanced not only in nutrition but also in varieties of texture and taste; food was not just served randomly, but thoughtfully and aesthetically on a fresh banana leaf with a particular spot for each food item depending on its purpose and characteristics; clothes, pots, fans and other daily-use commodities too were not just plain and practical but also colorful and with beautiful designs. Do we even need to call out the inherent aestheticism in Indian music, dance, hand-drawn arts, literature and poetry? The art of aesthetics and decoration are also shastras in themselves with their own treatises!

What a beautiful, divine, glorious culture is this of Sanatana Dharma, that has been preserved down millenia, and is living and exists even today!

When it comes to philosophy, none can even come close to the depth and breadth of philosophies and philosophical works that existed in ancient India! Name any philosophy of Europe and the west, and we can find that it was already written down as a treatise with slokas – be it even atheism, hedonism, atomism, naturalism, etc. The beauty of ancient Indian culture was that opposing philosophies were often welcomed, so that they could be debated strongly in order to strengthen their own philosophy. The philosophers who presented the opposing philosophies were never persecuted. They were debated, maybe even criticized, but never physically persecuted. There was an underlying spirit of harmony and acceptance. Persecution of mahatmas never happened in ancient India. Which is why it is a spiritual land!

In India, even today, a renunciate wearing a mere loin cloth is revered more than a millionaire! Why? Because Bharatiya samskriti (Indian culture) celebrates golden human values more than possessions, name, fame or achievement. Satyam (truth), ahimsa (non-violence), caring for people, compassion, and spiritual enlightenment – these are always cherished and held high. That is our culture and the world has a lot to learn from that model!

Down the annals of history, India has been the spiritual beacon of the world. It is a country that has attracted and continues to attract and show the path to seekers of the Truth from all over the world.

The very soil of India is infused with divinity. Bhagavan’s innumerable avataras (incarnations) happened in this land. There are hundreds of holy rivers and lakes in this land. There are innumerable holy kshetras in this land. An unending lineage of great rishis, acharya purushas, mahaans (realized saints), true sadhus and bhaktas have lived and continue to live in this land. Sri Swamiji says that just like certain types of soil are conducive to grow rice, wheat, etc., the soil of Bhaarat is conducive to sprout Mahatmas (Realized souls)! Not merely intellectual philosophers or speakers, but those who have actually experienced and realized the Truth. And who are capable of giving that experience of the Truth to you and me, if we really desire it.

We need such a country, culture, dharma to flourish. Not just for those who are in India. But even for those not from India, if they care for humankind, we need the spiritual kitchen of the world to remain sacred, intact, holy. So that the entire humankind can be nourished.

Click here to go back to the Aug 2022 newsletter page:
https://godivinity.org/newsletters/nama-dwaar-newsletter-august-2022/