Kanakamma! The very name is synonymous to Guru Bhakti! She was a great devotee of Bhagavan Sri Ramana Maharshi and attained the highest state through Guru Bhakti.

On 1st January 2010, on the day of Bhagavan Sri Ramana Maharishi’s 130th Jayanti, Kanakamma went around her Guru’s samadhi and stopped on the north side of the fence. Even as she stood gazing at the Ramana Mahalingam, she collapsed and was absorbed into her beloved Guru. What a befitting end to the great Guru Bhakta! 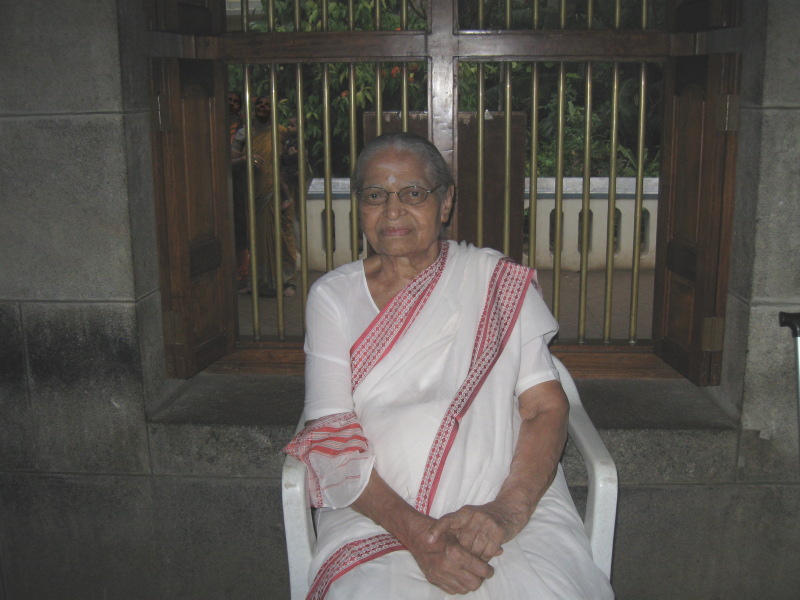 Kanakamma was born in a Tamilian family devoted to Bhagavan Sri Ramana Maharishi. Her father with his family lived in the then state of Andhra Pradesh. So she knew to read and write Telugu but did not have a working knowledge of Tamil. Her uncle and his family who lived in Tiruvannamalai were also ardent devotees of Bhagavan Sri Ramana Maharishi. Even as a child Kanakamma was drawn inward and would wake up at 4 am to sit in dhyana. She had no desire to marry, but at age thirteen she was forced to get married. Later, however, her father gave in to her wishes and did not send her to her in-law’s home.

Every year the family would visit Tiruvannamalai and visit Bhagavan Ramana for his darshan. As she grew up she felt more and more drawn to Bhagavan Ramana Maharishi. In 1946, in her early twenties, she decided to move to Tiruvannamalai for good and spend her life at the lotus feet of her Guru. Her grandmother who was an ardent devotee of Mahaperiyava spoke to her Guru about Kanakamma’s desire and sought his counsel in the matter. Mahaperiyava told her that Ramana was no different from him and she should be permitted to live in Tiruvannamalai. Thus the young Kanakamma, who was born in an affluent family with servants to carry out every bidding, lived alone in a small one-room home, cooking for herself in a firewood oven, for the sole reason to be near her beloved Guru. She would say, “I lived in the town. The ashram opened its gates for ladies at 7 am. So I would be there on the dot at 7 so that I did not miss darshan of my Guru even for a second. I would wake up early, cook my food, place some bricks over the plate so that the rats that abounded in that room will not topple it over, and run to the Ashram.”

In later years, when asked to speak about her Guru, Kanakamma would say, “What can I speak of Bhagavan?”

Her voice would choke. Her eyes depicting her deep love for her Bhagavan and the lips carrying a smile, she would say, “Bhagavan would smile. What a smile! Mandahaasam. Anyone who saw that smile was bowled over. People say ‘Madanamohana.’  Bhagavan’s smile was such. No one could help falling for it!”

“My association with Bhagavan was since my 8th year. We are Tamilians but my father lived in Andhra. My uncle was in Tiruvannamalai and every year my father used to bring us to Tamil Nadu. Of course, I do not remember much about my meeting with Bhagavan during my childhood days. Later, when I went to meet Bhagavan as a grown-up girl, the first thing that Bhagavan spoke to me was, ‘Where is Radha?’ (Radha is the shortened version of Radhakrishnan, her uncle’s son).

“Bhagavan used to describe the state of a jnani: ‘A musical concert is relayed over the radio from Hyderabad station. You listen to it in Chennai. This goes to show that distance (space) is a myth. What is being relayed in Hyderabad is being heard in Chennai. It is being announced that so and so is singing, so and so is playing the violin and so and so is playing the mridangam. You believe it. Don’t you? You enjoy the music. But if you open the radio, is anyone found inside? No. The Jnani is also like the radio set – Saami daan irukku, aasaami illaama poittaan! – Only God is there. The man has left!’ “

After the mahasamadhi of Bhagavan, Kanakamma had the good fortune of attending discourses on Bhagavan’s works by his ardent devotee and jnani Sri Muruganar. This ran over several months.  Years later, thanks to some devotees of Bhagavan, Kanakamma who had never had working knowledge of Tamil recalled to memory all that she had heard from Sri Muruganar and wrote them down in Tamil. Is this not a sure sign of Guru Bhakti? These writings have been published by Sri Ramanashramam.

Kanakamma’s Guru bhakti can be comprehended through her own words in her book Ninaivil Ninravai – “Bhagavan never spoke to me. Speech is for those who cannot understand silence.”

When a devotee asked whether she never felt bad about it especially while she saw him speak to other devotees, Kanakamma replied, “Yes, I used to think while going to him that I must talk this or that to him, or ask him this and that. I would go with such a thought. But the moment I went in there and saw him, I would at once feel, ‘Don’t you know every thought of mine? Is it necessary for me to tell you?’ When I tried to move close to him Bhagavan would turn towards me and look at me. All at once my mind would subside and I would also lose sense of my body. I would feel as if I was pulling my body with every step taken. This has been my experience.”