Once upon a time, there lived a dancer called Shyama. Shyama earned her livelihood by dancing for rich men of the town. One day, she gave birth to a little girl called Kanhopatra. When she was young, she met a few devotees of Lord Panduranga who talked about the glories of the Lord. As she heard the qualities of the Lord, she became devoted to Him and forever, wanted to be in His service. From then on, she would constantly sing on Lord Panduranga and dance to it. 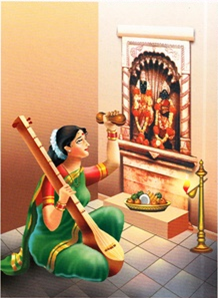 As time flew by, Kanhopatra grew up to be an exceedingly beautiful woman and an excellent dancer. Her fame spread far and wide. The king of Badar heard about her and desired to see her dance. He ordered his soldiers to fetch her.

The soldiers went to Kanhopatra and said, “Kanhopatra! The king desires to see your dance. Come with us.”

Kanhopatra refused saying, “Please tell your king that I do not dance in front of humans. I dance only for the Lord!”

The soldiers then threatened her. They said, “If you do not come with us, then the king will be very angry. He will punish you and your mother!”

Fearing the king’s anger, Kanhopatra finally agreed to accompany the soldiers. But, she said, “Before you take me to the king, please take me to the temple of Lord Panduranga in Pandharpur.” The soldiers agreed as they were happy that she was willing to come with them.

As promised, they took her to the temple of Pandharpur and said to her, “Come fast! We have a long journey.”

Kanhopatra hurriedly went inside the temple and fell at the Lord’s feet crying. She prayed, “Oh Panduranga! Ever since I was a little girl, I have been dancing only for you. How can I dance in front of the king now? Aren’t you the Lord of the universe? Then, isn’t it your duty to protect all beings? I am now standing here and begging for your protection. Won’t you show any mercy on me?”

As she cried, her spirit rose from her body and merged with the Lord. The priests who witnessed this were astounded. At the same time, they feared that the soldiers would punish them. So, they quickly buried her body close to the shrine of Lord Panduranga. Immediately, a tree sprouted in that place. Even today, one can see the tree when they visit Pandharpur.

So, what does the life of Kanhopatra teach us? It teaches us that the Lord never forsakes His devotees. All we need is true devotion in our hearts.