Lord Buddha is known the world over as the founder of Buddhism. In Hinduism, Lord Buddha is considered as a revered avatara of the Lord, and is often counted among the ten popular avataras of Lord Vishnu. 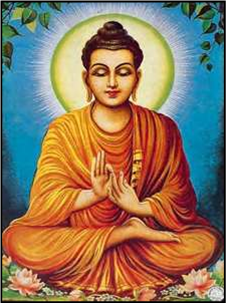 Born as Prince Siddhartha in a royal family, he initially enjoyed all the pleasures of a materialistic life. He was trained in various forms of art, given a good education and brought up in abundance of wealth. The king’s fervent wish was that his son would grow up and take over the kingdom as his successor.

But fate decided otherwise. Siddhartha had never been exposed to the miseries of life. Once, when he ventured out to get a glimpse of the kingdom, he came face to face with the suffering of the world. He saw an old man weakened and frail with age, a man suffering from disease, a corpse of a dead man being carried by his lamenting kinsmen, and finally, an ascetic who looked tranquil and unaffected by anything. This incident affected Siddhartha to a great extent. He realized that nobody could escape aging, illness or death. He went into deep contemplation and started his quest towards enlightenment after renouncing his family, title and wealth. He attained enlightenment under a tree in Gaya, India, and henceforth came to be called Buddha, the Enlightened One.

The prime difference between Hinduism and Buddhism lies in the latter’s non-acceptance of the Vedas as the prime scriptural authority.
However, in this context, Srimad Bhagavata Mahapurana clearly says:

This ancient verse says that the Lord will incarnate as Buddha at the dawn of Kali Yuga in a place called Gaya; that He himself would preach against the Vedas because in the Age of Kali, the Vedas will be interpreted superficially and will be misused by evil people for their selfish needs.

It might be quite perplexing as to why Bhagavan himself would want to speak against the Vedas, which are verily His own words.

Here we should understand that Bhagavan, is a complete embodiment of immense compassion. He only wants to bring every single person to Himself, even at the cost of refuting His own words! The fact that He wants everyone to reach Him is indeed the reason why he takes so many avataras and also sends so many different Mahans, to show so many different paths to Him, in accordance with the situation and circumstances of a particular age.

Therefore, at a time when people had become very ritualistic, Buddha came to show a way to Liberation, to such people who had lost faith in rituals and rites, and those who were unable to interpret the Vedas correctly according to the Age. This too is only the compassion of the Lord.

Buddha Purnima, the birthday of Lord Buddha, was celebrated this year on May 5-6, 2012.

2 Responses to "Lord Buddha in Hinduism"