On the banks of River Krishna is the town of Mattapalli, home to one of the five famous temples in Andhra Pradesh for Lord Nrisimha. Here, Lord Nrisimha is found to be sitting in Padmasana posture and is about one foot tall. He has four hands and he holds the discus and conch in his upper hands and is resting his lower right hand on his knee. 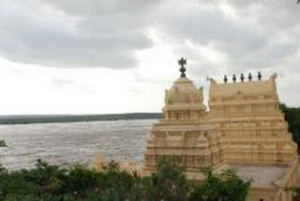 His lower left hand is not visible. His consort is RajaLakshmi. Typically, in Lord Hari’s temples, Garuda is seen facing the Lord, near the Dwajasthamba. In Mattapalli, Lord Hanuman also stands next to Garuda, facing the Lord.
Lord Nrisimha is self-manifested and is believed to have been worshipped by sages for several ages. He revealed himself in this age of Kali, out of compassion for the masses. He was found by devotee Machireddi in a cave. The devotee built a modest structure near the site and consecrated Lord Nrisimha there and arranged for worship.
Devotees, when afflicted with diseases, pray to Lord Nrisimha of Mattapalli for cure. Sri Muralidhara Swamiji has mentioned this particular power of the Lord in his song on the Lord. The song, set in the beautiful raga Simhendramadhyamam, and its meaning are presented here.

Meaning
[O Lord, You are]
The brave Lion, bold Lion
The fierce Lion, the roaring Lion

You are boisterous, the One who gives joy to Your devotees
One who dwells at Mattapalli, the One who is the abode of Truth

You are the very form of Yoga; the destroyer of grief
You are the cure for diseases; the ultimate pure One

You are the unflinching protector of the little boy (Prahlada)
You are One who is dark-hued like the blue emerald; the One who loves the surrendered ones