Every year we celebrate the Divine wedding of Lord Premika Varadan and Madhuri sakhi (Lord Krishna and Radha). This divine celebration is done along the lines of Bhagavata Sampradaya, a path of celebrating the Lord that has been established by great Mahans. In this divine wedding, there is the practice of taking Lord Krishna and Radha in a procession in separate palanquins (like a Janavasam). 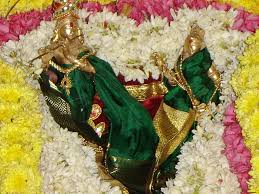 The sight of the Lord and His Consort, adorned with beautiful garments, jewels and garlands is a sight to behold! Just like how a messenger announces the arrival of the king, similarly, when the Lord of the Universe and his consort embark on the tour of the town, a grand announcement is made by the devotees. This announcement, that describes Lord Krishna and Lord Radha’s grandeur and beauty, is written as a gadhyam (an elaborate prose composition is called gadhyam in Sanskrit). Sri Swamiji has composed gadhyams describing the beauty and the qualities of our dear Lord Premika Varadan and Madhuri sakhi that can be recited as they are coming in the procession.