Navaratri, Kolu and The Mother Goddess

The Navaratri festival of the Mother Goddess was just celebrated this month and Indian communities everywhere were agog with the festivities. Navaratri is a time to invite friends and family, a time of togetherness and bonding, but more importantly, it is also an auspicious time to think of God, worship Him in the form of the Divine Mother and chant the Divine Names. 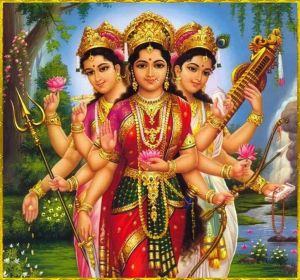 Generally, a child is more comfortable with its mother than the father, because the mother is loving, tender and affectionate and looks after the needs of the child. Similarly, in spirituality, the aspirant approaches the (form of) Mother first, who then shows Her spiritual child its Father. The Mother also ruthlessly kills the enemies of egotism, cunningness, selfishness and crookedness (represented by the Asuras who are killed by the Mother Goddess, in Indian scriptures).

The word navaratri means ‘nine nights’ in Sanskrit. The festival is celebrated for nine days and nights and the tenth day is worshipped as Vijayadasami. There are two types of ‘navaratris’ in a year. The first comes in the spring season and is known as Vasanta Navaratri and the other, more popular, Navaratri comes in the fall season and is Sharad Navaratri.

The festival commences on the first day of the bright fortnight of the month of Purattasi. It is celebrated differently in different parts of India. In Gujarat people celebrate with garba and dandiya dancing. In West Bengal, they make pandals, and worship images of Durga. In Tamil Nadu, people place dolls and idols on steps, called Golu or Kolu.

The interesting Kolu doll arrangement is usually such that images of the Supreme Lord are placed on the highest step, and His incarnations, devas, sages, saints and other exalted beings are placed on the following steps. Ordinary human beings are placed in the lower steps, with animals, grass, etc. finding a place lower than humans. The philosophy of this arrangement is that if human beings have good intentions and follow dharma (righteous living), they go up the steps, and finally merge with the Lord. Instead, if they lead evil lives and harm others, they fall down to lower life forms. The dolls also depict social and cultural activities like marriages, games, flowers and vegetables, etc. emphasizing the fact that the Lord is present in everything in this Earth.

During the first three days of Navaratri, Durga is worshipped to destroy all our impurities. The second three days are devoted to Lakshmi, who bestows wealth and abundance. On the final three days, Saraswati, the goddess of wisdom, is worshipped.

On the ninth day, Saraswati Pooja is performed. Books are stacked in front of an image of Saraswati with prayers to bestow knowledge. Ayudha Pooja (anointing tools and equipment) is also performed on this day. Sweets and flattened rice mixed with peanuts, fried gram and jaggery are distributed.

On the tenth day, Vijayadasami is celebrated to mark the victory of good over evil and a new prosperous beginning.  Kids read a book from the stack of books kept before Saraswati. Many children start attending play school or other arts classes on this day. Akshara abhyasam (auspicious initiation of a child into writing) is done on this day.

The Mother Goddess is known by different names in different parts of India – Bhagawathi in Kerala, Chamundeswari in Karnataka, Kamakshi in Kanchi, Meenakshi in Madurai, Gnanambal in Kalahasthi, Bramarambika in Sri Sailam, Tulja Bhavani in Maharashtra, Ambaji in Gujarat, Jwala Mukhi in Punjab, Vindya Vasini in Uttar Pradesh, Vaishnavi in Jammu, Ksheera Bhavani in Kashmir, Kali in Bengal, Maihar Devi in Madhya Pradesh, Kamakya in Assam, and numerous other names and forms.

Sri Mahaperiyava, the great saint of Kanchi, states: During Navaratri, we pray to Durga Parameswari (Malaimagal – daughter of the mountain Himawan), Mahalakshmi (Alaimagal – the one who emerged from the Ksheerabdi, the Ocean of Milk) and Saraswati Devi (Kalaimagal – the One who imparts knowledge). Whether we consider them as three goddesses or as an embodiment of all the gods, They are all that is One only, the One Parasakthi.

2 Responses to "Navaratri, Kolu and The Mother Goddess"