Sri Ramanujam Ji embarked on his East Coast satsang trip and the first stop was Richmond,VA. He delivered a lecture series on  the essence of Srimad Bagavatham at Vision Learing center in Glen Allen, Viriginia from Thursday, October 10, 2013 to Sunday, October 13, 2013. Over 45 people attended this lecture series during the auspicious Navarathiri season and tasted the nectar of Srimad Bhgavatham.

Sri Ramanujamji started with a note on Srimad Bhagavtham’s glory and traversed along Srimad Bhagavatham, which remains as supreme Thilaka among all Purana’s. He emphasized upon “Shravana Bakthi” and beautifully expounded the relevance of Bhagavatha Dharma in this Age of Kali. He further went on to highlight how Bhagavatha Dharma can transcend one’s mundane desires into flowering of ecstatic love at lotus feet of Krishna.

Sri Ramanujamji marvelously structured the entire discourse around this nucleus called causeless Grace of Bhagavan since Krishna’s infinite compassion and mercy on all  his devotees  does instigate a noble quality in everyone’s heart -Gratitude which inturn  flowers the unconditional Love called Bhakti in everyone.

VA GOD Satsang is indebted at lotus feet Sri Swamiji  whose causeless Grace has bestowed the devotees with the rarest fortune of listening to “Srimad Bhagavatham” from Sri Ramuanujamji whose versatile elucidation is relishable alike to a layman as it is to that of a pandit. 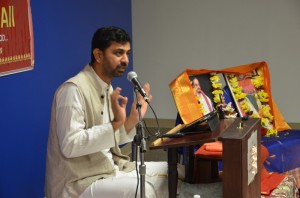 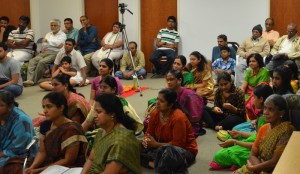