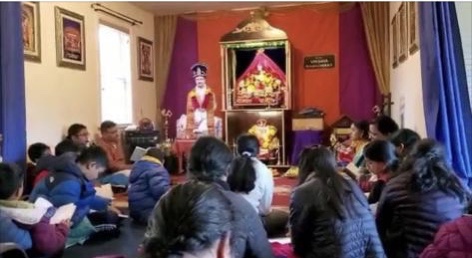 ﻿With the immense grace of Sri Swamiji and the Divine couple, Virginia GOD Chapter celebrated Gita Jayanthi and Vishnu Deepam on Saturday, 7th of December 2019.
The day started with Prabodhanam to the lordships followed by complete Bhagavad Gita chanting by the devotees from Maryland and Virginia Satsang members.
It was followed by arthi and lunch prasad. Over 35 devotees eagerly attended and took part in the parayanam. After lunch Akanda Mahamantra chanting took place which was followed by Vishnu Deepam and Deepotsav in the evening. After the lamps were lit many Guru Keerthans and other Madhurageethams were rendered.
The Satsang concluded with Arthi and kaliyayum keerthan. Dinner prasad was relished by all the devotees.