Categories: Gopa Kuteeram Kids Camp, Krishna.
On Sunday, September 18th, 2016, the Seattle chapter of the Global Organization for Divinity hosted a free Gopakuteeram carnival with the goal of celebrating the true essence of Krishna in a way that children can relate to.  The carnival was hosted in the parking lot of the VEDA Sri Venkateshwara temple in Redmond, WA.  The weather forecast was for 90% rain with thunderstorms, but with His grace, it ended up being a beautiful, warm and sunny day with not a single drop of rain!
The carnival was divided into five different cities/villages: Madhura, Gokulam, Vrindavan, Dwaraka and Golokam.  The first four sites were filled with several games in each that symbolically related to Krishna leelas associated with that location.  Examples of fun games include throwing water balloons at Kamsa, knocking pins (representing jail guards) down to help Krishna get out of jail right after birth and more!  Children win tickets when they play each of these games which they then can use to collect a prize.  The last site, Golokam, was special in that it provided a different type of experience for the children.  There were puppet shows happening at Golokam for the children to enjoy!  The theme of the puppet shows was “Krishna Provides”.  It depicted how Krishna truly takes care of His devotees.
The carnival included pony rides.  Children also got an opportunity to pet the ponies and feed them at the end to show the pony their gratitude.  The children had a chance to sharpen their creative side via art lessons from professionals.  In addition to all of this, mehendhi was also offered as part of the carnival.  The celebrations concluded with a special uri adi/dahi handi with traditional mud pots as well as dandiya/garbha/divyanamam outside with everyone dancing around Govardhanadhari.
The event was attended by over 200 children who were all thrilled to have been a part of the carnival.  Seattle GOD Chapter hopes to make this an annual event. 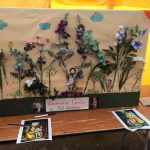 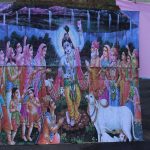 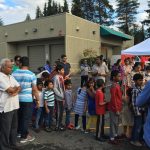 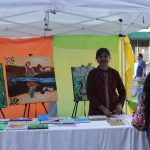 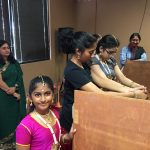 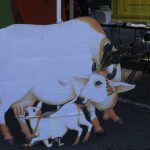 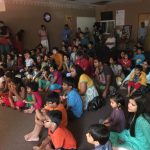 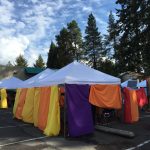 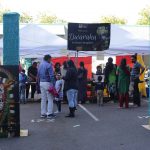 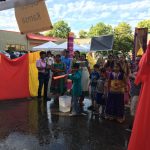 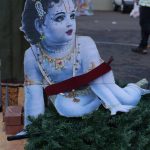 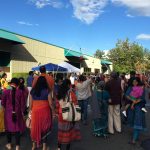 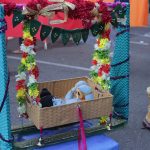 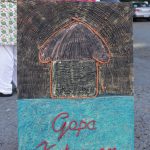 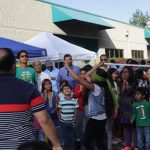 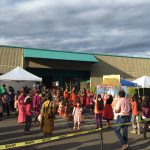