With the blessings of Sri Swamiji, Jacksonville Gopa Kuteeram children had a golden opportunity of performing a Hari Katha – ‘Ikshvaaku Kuladhanam’, on the auspicious occasion of the Sahasrabdhi Mahotsavam of Sri Ramanujaacharya on Sunday, April 30th, 2017 at the Hindu Society of North East Florida, Jacksonville, FL. Eight children participated in the event and took the audience back from the era when Lord Brahma brought Sri Ranganatha to Sathya Lokha to the era when He was brought to Ayodhya. The children initially talked about the Surya Vamsa kings from Manu and Ikshvaaku to Lord Rama who were all HIS loyal and royal bhakthas. They beautifully narrated the ancestral deity of the Surya dynasty, Sri Ranganatha’s journey to Sri Rangam, thanks to the tapas that Dharma Varma, a Chola king, did. They also explained the connection between the kshEthrams Kanchi, Sri Rangam and Melkotte and Sri Ramanuja. 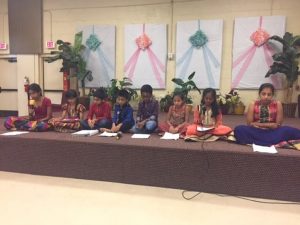