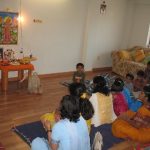 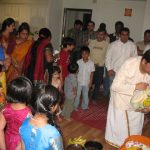 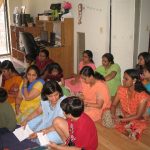 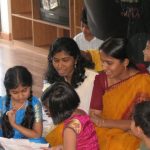 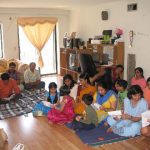 Nama Sankirtan satsang was held at the residence of Mrs and Mr Suri of Malden Towers.
At 10:00 am, the satsang started with Mahamantra Kirtan. Devotees joined the kirtan as it spanned through the hour.  Towards the end of the Nama Sankirtan, all the devotees sang Sri Swamiji’s “Kaliyayum Bali Kollum” kirtan.

This was followed by a few bhajans.  The kids stole the hearts of everyone by their beautiful kirtan on Lord Venkatesa and the “Raghupati Raghava…” bhajan.  Then other devotees sang a few kirtans.

“In Bhagavat Gita, the Lord has promised to incarnate every time there was harm to the Sadhus and when Dharma deteriorates.  But after Lord Krishna’s incarnation, it looks like He has not yet incarnated, although, there is much Adharma all over the world.  The truth is that the Lord has chosen to incarnate as great Saints in order to resurrect the Dharma, apt for that time.  One of the greatest Avatars is that of Adi Shankara, who showed the path of Bhakti, by his innumerable slokas on different deities.  His devotion for Lord Srinivasa and for Mother Ganges are evident from his compositions.  Another great Avatar who not only showed the path of Bhakti as the easiest means to reach the Almighty, but also took it to the grassroots, was Bhagavat Ramanuja – who showed the path of Bhakti to even the social outcasts.  Ramanuja that gave the Divine Name of Lord Narayana to one and all as the easiest means of attaining Moksha.

Azhwars, especially Sri Andal, showed us that service (‘kainkarya’) to the Lord is the Supreme Dharma, for it pleases the Lord. The easiest means to pleasing the Lord is by chanting His Divine Names, for it is one that can be done all the time – irrespective of place, time and person.”

All the participants were fortunate in reminiscing of Adi Shankara and Sri Ramanuja during their Jayanti (that falls on April 30th) and on the holy occasion of ‘Akshaya Thritheeyai’.

More than 50 devotees joined in the mass prayer towards the end of the talk and chanted the Mahamantra.  This was followed by Harathi and Prasad.

The devout family of Mr. Suri and his friends had indeed rendered a great service to the community and the Almighty by arranging a satsang in their residence and enabling one and all to chant the Divine Names!