Shobhaji delivered a three day discourse series on devotees of Lord Guruvayoorappan in Dallas from September 22 to 24th 2017.
Shobha ji started the Satsang with Mahamantra and prayer to Sri Swamji and the first day discourse on Vamana Avatar happened at the residence of Sri.Mayaji and Smt.Jayanthiji on Friday, September 22nd 2017 from 7pm to 8pm. She beautifully narrated the intense devotion Mahabali had for the Lord. She then spoke about the omni-present, omniscient, ever compassionate Lord Hari who came down in the form of Vamana Bhagavan – in a highly concentrated sweet form and compared His sweetness to the sweet dish, “Therati Paal” and asked Mahabali for 3 feet of land. “mUndraDi maN kETTu vandu nindrAy mUvulagamum vaLarndu uyarndu nindrAy” And, what to say of the great devotee Mahabali, who humbly bowed his head and surrendered himself to the Lord in order to uphold his word. Even when he knew that it was Lord Hari himself who had come to conquer him! What a conviction he had, even when he stood there devoid of his power, position, wealth,possessions, supporters including his own guru Shukracharya!
Shobha ji started off with a prayer song in Malayalam which means the following: May my Gurunathan help me to keep the auspicious names of Lord continuously on my tongue and to make this human life meaningful and fruitful. Day 2 of Navarathri Utsav began with these Divine words from Jnanappana at the residence of Sri.Rajesh and Smt.Sukaunya Rajeshji on Saturday,September 23rd 2017 from 10am-11am. Smt. Shobhaji elucidated many interesting incidents from the life of great devotee Sri Poonthanam. Throughout the discourse, she correlated incidents with apt verses from Kaliyaiyum Bali Kollum followed by chanting of Mahamantra. This was exactly in line with the prayer of Sri Poonthanam.
The third day discourse series on ‘Essence of Narayaneeyam’ took place at the residence of Sri.Nandu and Smt.Vidya Nandu on Sunday, September 24th 2017 from 10am to 11am. ‘The essence of Narayaneeyam is the presence of Guruvayoorappan’ mentioned Smt Shobhaji ji. As a Mahan and His message are no different, Smt Shobhaji beautifully narrated the various cantos of Narayaneeyam and interlaced them with the bhavas of Sri Narayana Bhattathiri. As the cantos progressed, we were taken on a wonderful ride into the intense emotions of the saint,from one of deep pain due to his bodily ailment, of him questioning the very purpose of creation,slowly feeling the love of God, then starting to enjoy His Leelas, understanding the very purpose of creation which is to serve His Lotus feet and culminating in being blessed with the darshan of Guruvayurappan. 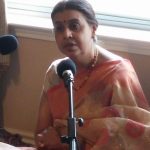 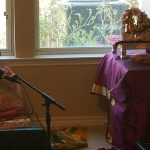 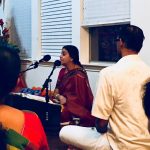 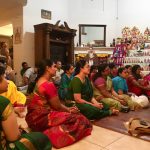