By the grace of Sri Swamiji HH Maharanyam Sri Sri Muralidhara Swamiji, Sri Poornmaji conducted a 2 day discourse on “Let us go to Pandari” from on Friday, June 14th and Sunday, June 16th and a one day discourse on “Hanumadh Prabahvam” on June 15th Saturday at New Jersey.

On June 14th Friday, Sir Poornimaji discoursed on the greatness of Satsang and Pandarpur at South Brunswick, New Jersey. The discourse included the following key highlights.

1) Simplest definition of attaining the lord, moksha, liberation etc is “state of absolute joy” that is “100% happiness without any sorrow”. “Happiness needs no reason” and “Satsang” shows a way to experience that.

2) Time and again Bagawan comes down to show us the path to attain that “state of absolute joy”.

3) In Pandarpur – For the sake of a devotee(s), bagawan who is the essence of the vedas, the birthplace of all nigamas, that supreme being decided to come and stand on a brick!! Sant Thukaram beautifully captures this in his abhang “bhaktha bhAgya dhani pandariye” “vedAnche sAr” “nigamAnche mAhera” “thohA parAtpara ubhA vite”. About 25 devotees attended the satsang.

On June 15th Saturday, Sri Poornimaji discoursed on Hanumadh Prabhavam at Sai Dutta Peetam, Edison, New Jersey. Sri Poornimaji elucidated how Hanumanji holds a special place in Sri Ramayanam, how Sugriva became a hero from zero due to the satsang of Hanuman, how Hanuman helped Sugriva get the friendship of Rama even though he ran away from Him, the sweetness and uniqueness of Sundara Kandam, Hanuman as guru who united the Jeevatma and Paramatma , how no one died after Hanuman arrived in Ramayanam, how Rama’s ring inscribed with Rama’s name brought joy to Sita Matha, how Hanuman earned the rare gift of Rama’s hug – how Hanuman achieved everything by the power of Rama’s name and how he is standing where every ever we chant the names of Rama!

Following the GK program, Sri Poornima ji discoursed on the greatness of devotees Pundalika, Namadev and Janabhai. Hearts melted as we heard the sincerity of Pundalika towards his parents and Janabhai’s steadfast faith on chanting the names of Vittala so much so that her cow dung cakes reverberated with the sounds of Vittala when she was challenged by a neighbor! About 40 devotees attended the satsang.

New Jersey GOD Chapter offer their humble prayers at the lotus of feet of Sri Swamiji for more satsangs! 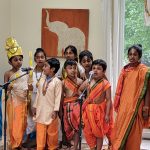 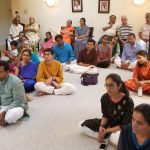 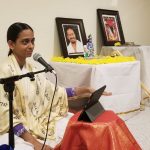 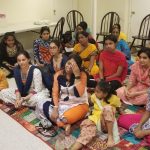 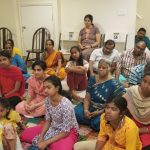 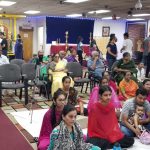 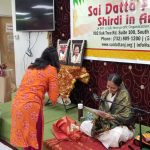