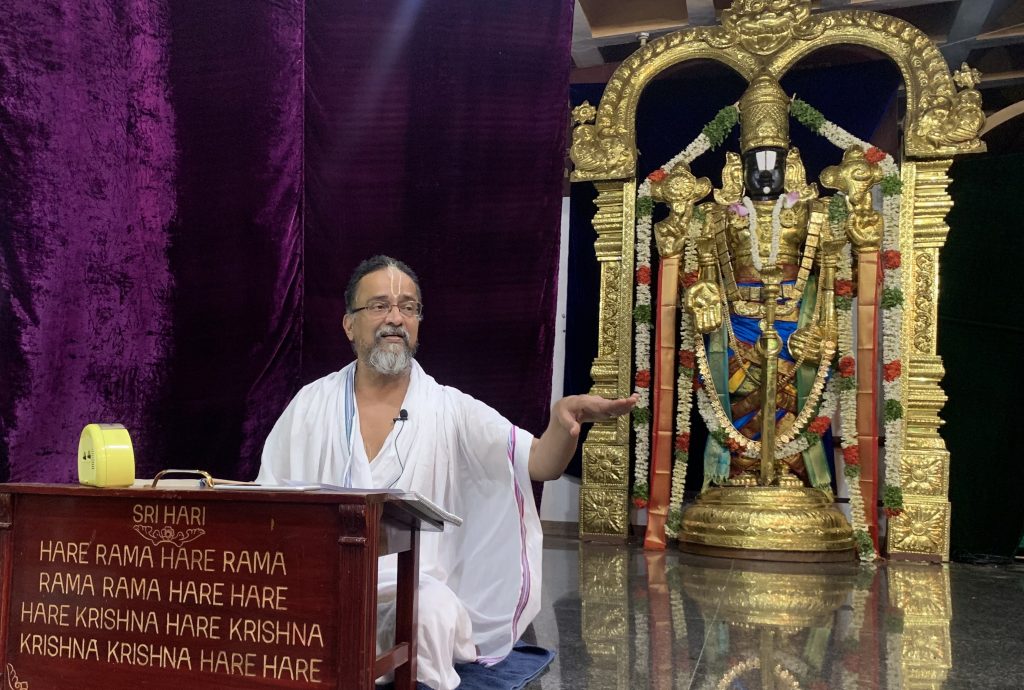 HH Maharanyam Sri Sri Muralidhara Swamiji, time and again has talked about how we need to have patience and how we should continue to persevere and not falter while trying to reach our goal. In his recent pravachans on Srimad Ramayana, he talks extensively about the greatness of Sage Vishwamitra and how he attained his goal of being acknowledged as a Brahmarishi by Sage Vasishta himself, and quotes it as an example for us.

A person who wants to attain a goal must be firm in it. They should not compromise anything for it. There may be many hurdles that may come across their way, that may try to prevent them from reaching their goal. A person who is firm in their goal, would persevere and will cross such hurdles. We can be inspired here by our very own Sage Vishwamitra and his steadfast tapas and repeated perseverance despite innumerable obstacles and falls from the path.

Sadananda, the son of Sage Gautama and Ahalya, narrates the story and the greatness of Sage Vishwamitra and his tapas, in King Janaka’s yagnashala in Mithila, where Rama and Lakshmana were present as well.

During the time when Sage Vishwamitra was a king, he visited his Guru, Sage Vasishta, along with his chaturanga sainya (army of elephants, chariots, cavalry and infantry). Sage Vasishta was able to feed Vishwamitra and his entire army by praying to Kamadhenu, who produced everything that was needed for the whole army including the soldiers, elephants, horses, etc. This kindled in Vishwamitra the desire to possess Kamadhenu. Vishwamitra first asked Vasishta to give him Kamadhenu. But when he refused, Vishwamitra then tried to take Kamadhenu away against her will. Then when he continued to forcefully take her, he was defeated by the soldiers that rose from Kamadhenu after Vasishta prayed to her. All of Vishwamitra’s sons were killed except one who didn’t come to the battle. The defeated Vishwamitra handed over his kingdom to that son and went to do tapas (penance). He acquired a lot of asthras (divine weapons) from Parameshwara Himself and went to fight with Vasishta again, this time without an army. Vishwamitra was again defeated by Vasishta’s brahmadandam which rendered all of Vishwamitra’s weapons useless.

Sage Vishwamitra realized that jnana was what he should strive for, and not asthras. He wanted to become a Brahmarishi. He did intense penance this time for a thousand years, surviving only on fruits, vegetables and dried leaves. Lord Brahma was immensely pleased with his penance and awarded him the title of “Rajarishi”. Vishwamitra felt dejected as he was only called a Rajarishi and not a Brahmarishi. He did not want to give up and continued his penance.

Meanwhile, Trishanku, an adamant king who wanted to go to heaven with his mortal body, and whose request was rejected by Sage Vasishta and his sons (an act of compassion on Trishanku in not granting his foolhardy desire) went to Sage Vishwamitra after being cursed by Vasishta’s sons. Sage Vishwamitra, with his tapas disturbed, wanted to help Trishanku because he now wanted to prove he could do something that his Guru (Sage Vasishta) didn’t do. Looking at the plight of Trishanku, he decided to a yagna to send him to heaven in his mortal body. For this, he invited several rishis. Some of them refused to come because of the reckless and unwise objective of the yagna. He also invited the 100 sons of Vasishta who naturally refused to come. Vishwamitra then cursed Sage Vasishta’s sons. Although he raised Trishanku to heaven, he was rejected and pushed upside down by the Devas. Vishwamitra made him stay where he was, upside down in the sky, midway between earth and heaven. But after all this, he lost his hard-earned  tapas because of expending it in cursing other sages and trying to fulfill Trishanku’s weird, useless desire. With his tapas lost because of this external hurdle, he remembered his goal once again and went to do tapas again.

Sage Vishwamitra continued his tapas again for another thousand years. His next hurdle was in the form of a boy called Shunashepa who had offered himself for a human sacrifice by a king, in a spurt of impulsiveness after being rejected by his parents because he was the middle son. But Shunashepa regretted his decision and took refuge with Sage Vishwamitra, asking him to protect him as well as to save the king’s yagna. To save him, Sage Vishwamitra asked his own sons if one of them would go in place of Shunashepa. As no one was ready, he ended up cursing his own sons like he had Vasishta’s sons, and lost his tapas. He saved Shunashepa by giving him two mantras to be recited without anyone’s knowledge, to please Indra. With the help of these mantras, Shunashepa was able to please Indra who set him free as well as gave the king the fruit of his sacrifice.

Having realized that he had lost his tapas again, he moved to a different place again and started doing an intense penance for another thousand years. This time, Indra sent Menaka as a hurdle to Sage Vishwamitra’s penance. Mesmerized by the beauty of Menaka, Sage Vishwamitra forgot his purpose and started a family life with Menaka. Ten years went by after which he realized his folly. Realizing his fault, he did not curse Menaka but took leave from her and this time went to a secluded place so as not to get trapped by any internal obstacles like lust and intensified his tapas once again.

Brahma was pleased but would still not call Vishwamitra a Brahmarishi as he still had not won over his senses. Next, Indra sent Rambha to disturb him. She went reluctantly, afraid of the sage. Sage Vishwamitra felt his mind disturbed for a second but composed himself. But although he did not give in to kama, he fell prey to krodha (anger). Manmatha, the god of love, who was there to entice Sage Vishwamitra, ran away as soon Vishwamitra looked at him. Sage Vishwamitra then angrily cursed Rambha to become a stone. However, this once again caused him to lose his tapas!

Still, Sage Vishwamitra did not want to give up. He moved again to a different place and this time, he gave up on food. He started doing an even more severe penance. He prayed that his body should survive during the tapas and that no harm should occur to his body. After years and years of tapas, when Sage Vishwamitra was finally about to eat some food, Indra himself came down in the disguise of a Vedic scholar to test Vishwamitra. He told Vishwamitra that he had been without food for days and asked for food from Vishwamitra. Vishwamitra gave him the food happily without feeling angry or sad, even though he was starving. At last, Sage Vishwamitra passed the final food test, which was the ultimate test for the senses, and became a jitendriya (one who had won over his senses). Brahma, thoroughly pleased with Vishwamitra, called him a Brahmarishi and on the request of Vishwamitra, Sage Vasishta too came there and acknowledged that Sage Vishwamitra was indeed a Brahmarishi.

Thus the story of Sage Vishwamitra shows us to persevere continuously even when many hurdles come along the way. We have to stay focused, be patient, and persevere until we reach our goal. The same is true for an aspirant who wants to progress spiritually. Start by chanting a few namas, but do it with shraddha every day. Don’t give up because you don’t immediately see any changes. Sri Swamiji gives us many examples for this. Just like how ten termites multiply exponentially into lakhs of termites to grind down a huge banyan tree, the same way, each nama we chant will multiply exponentially and one day it will destroy all the vasanas in our mind, thus leading us to attain bhakti, jnana and vairagya and finally moksha.