Can We See God?

Sri Swamiji, in a recent discourse, beautifully explained what it means to see God, how Mahatmas saw God, and clearly delineated the pre-requisites, steps and process by which even we can see God. Read the below excerpt from his discourse for clarity about the answer to this question that has intrigued humanity through the ages. 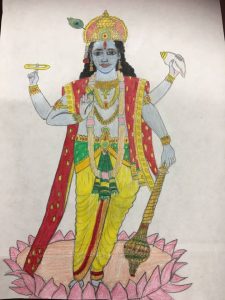 If someone asks us, “Can you see Bhagavan?”, would we respond assertively with confidence?

Listening to the life stories of such Mahatmas like Sri Ramakrishna Paramahamsa, Sri Chaitanya Mahaprabhu, Bhakta Meera, we understand, either through their kirtans or experiences, that they have seen Bhagavan. Now this makes us wonder that if Mahatmas have seen God, and how did they see Him? Is it possible for us also to see Bhagavan?

Sri Swamiji answered this in his discourse. Do Mahatmas see Bhagavan as a person standing before them just like we see someone standing in front of us? It is not so. If one were to perceive Bhagavan through any one of the 5 sense organs, then what was perceived is not Bhagavan because if He could be perceived by the 5 senses it would simply reduce the magnificence of Bhagavan. Do the Vedas not say that the Supreme One is beyond the 5 sense organs and mind?

Then does it mean that the Mahans did not see Bhagavan? No, they indeed saw Him! If so, how? They saw Bhagavan in the state of samadhi. And in this state of samadhi, when they see Bhagavan, only Bhagavan and that Mahatma are aware of the darshan. No one else can see. Not even a person who may be right next to the Mahatma.

So, the next obvious question is, what is this state of samadhi? There are different states of mind that we are all well-aware of: jAgrat, swapna and sushupti. Jagrat is nothing but the waking state or state in which we are active. Swapna is the dream state. Sushupti is the state of deep sleep. All these three states happen as a result of vasanas or latent tendencies. Ordinary people like us can be only in one of these three states. But once all the vasanas are destroyed, which is true in the case of Mahatmas, then the state that they experience is called “samadhi”.

Now, if Bhagavan can only be seen in the state of samadhi, what about the stories and leelas of Pandharpur devotees and others in which we hear about how Bhagavan Himself went as a cobbler, hairdresser, etc. and gave darshan not only to Mahatmas but even those who did not believe in Him? In these scenarios, Bhagavan chooses to take a human form to play with His devotees. And in such cases, even Mahatmas are unable to recognize Him as Bhagavan at that moment, and often realize only later that it was He (as in the case of Sant Eknath whom Bhagavan served, as a young boy, for 12 whole years without being recognized).

So if Bhagavan has to be perceived by our five senses, then it is possible only when He comes in the form of a human (or animal, etc.). But if one wants to have the darshan of Bhagavan in His divine form, then He can be seen only in samadhi.

The FIRST step to seeing Bhagavan is CONVICTION. We should first be 100% convinced that we want to see Bhagavan. If we are not fully convinced, then even if we are sincerely chanting a single divine name, we may end up gaining some powers like being able to predict the future or other occult powers. Then we may fall into the trap of fame, comforts gained by these powers and will tend to swerve from the goal that we have to see Bhagavan. Not only that, our goal of wanting to see Bhagavan needs to arise from our own true conviction, and not because of being influenced by someone else’s idea; because in the latter case, our thoughts will not be steady. So the first and foremost step in seeing Bhagavan is to have CONVICTION. Be 100% convinced about the wanting to see Bhagavan.

The SECOND step is to have a firm BELIEF that we can see Bhagavan. Initially, we asked the question, “Can you see God?” Most of us who could not answer assertively with confidence would wonder how to establish that belief that it is possible to see Bhagavan? How can we change our thoughts? Thoughts are not in our control. We cannot change our thoughts according to our wish. Thoughts control us. The only thing that we can control are the words that we utter. We often see that Mahans sing again and again, “tE darshan dEhi.. tE darshan dEhi..” Why so? Because when we repeat the words, WORDS WILL BECOME OUR THOUGHTS. As we do not have any control over our thoughts, so the technique to change that is by repeating the words of what we want again and again. For instance, if we keep repeating “No Name, No Fame, No self interest, Only Krishna!” eventually it will become true for us. When we keep repeating it again and again, these words will become our thoughts. Along with doing the japa of a single Nama, one must also repeat the words again and again, loudly to strengthen the belief.

Even though the sins committed are washed away, the desire to commit the sin or the thought of committing that sin remains as long as our vasanas are there. So, as the next process Nama removes our vasanas. Then as we continue chanting Nama patiently we undergo some divine experiences in our dream or in dhyana. And the next step as we progress is manolaya or one-pointed mind. And after manolaya is the state of samadhi where the vision of Bhagavan takes place. When we chant Nama and don’t see any tangible result, we must understand that we are in step 1 and 2; where our sins and the vasanas behind the sins are being removed. We should not lose patience and must understand that some process is in progress. Patience and perseverance are very important.

When we chant Nama, as we are already on the path, the destination is sure to be achieved. In order to be successful in life (both spiritually and worldly), there is only one thing needed and that is DISCIPLINE. Only with discipline, one can be successful.

And as we chant Nama continuously and when the desire to see Bhagavan is earnest, Bhagavan Himself will send an uttama Guru. Just like how Sri Shuka came in search of Parikshit, an uttama Guru will come.

Click here to go back to the Nov 2021 newsletter page:
http://godivinity.org/newsletters/nama-dwaar-newsletter-november-2021/

One Response to "Can We See God?"