Sincere prayers are always answered. Only, the answer may not be in the manner or in the time that we expect. And in fact, only with the grace of God can we even realize that our prayers have actually been answered.

The Texas drought story is a clear illustration of this fact:

All through the latter part of 2010 and the first half of 2011, there were very little rains in Texas. By July-August, the whole of Texas was under “exceptional” drought (technically the highest level of drought), the worst year-long drought in the state in over 100 years. The US drought map showed Texas in a deep, blood-red color (indicating “exceptional” drought). 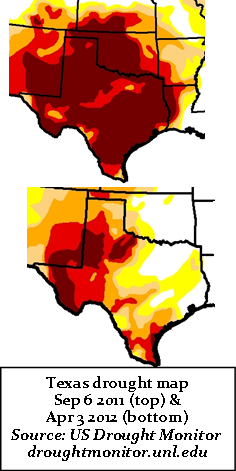 By God’s grace, in the USA, even in such a severe drought most of the population still had water in the taps and abundant drinking water. However, the farmers were affected badly, and food prices everywhere were on the rise. Further, Texas being an agricultural state that contributed significantly to the country’s economy, this drought, if it lasted until summer 2012—which was what the weather forecasters were predicting at the time—would have a much larger nation-wide as well as global impact.

Several churches, temples and organizations around the state and the country prayed for rains in Texas. Global Organization for Divinity was no exception.

There was a large spate of rains in both places and across the state the same week. However, while they were welcome showers, they were certainly not enough to alleviate the drought, which was very deep and harsh.

HH Sri Sri Muralidhara Swamiji came to know of the Texas situation, and asked us to once again perform prayers with continuous Mahamantra chanting at Houston Namadwaar, this time for 2 days. So on Sep 24 and 25, the Mahamantra was chanted for 12 hours each day at the Namadwaar, with prayers for rains in Texas and alleviation of the drought. Devotees from all around the USA and Texas came for the event and chanted the Mahamantra in unison.

While everyone who chanted expected a heavy shower the same day, there was none. Nor was there a shower the next day. Finally it rained a few days later, but it was not the drought-destroying downpour that we had prayed for! The Lord’s plans being incomprehensible, everyone was disappointed.

It didn’t rain much for the next month or so. And although the drought continued to persist, everyone completely forgot about the prayers. But the fact is, however forgetful the devotees may be, the Lord Himself never forgets the prayers that go up to Him. He knows when is the best time to answer them, and in what manner.

In the winter, it unexpectedly started to rain in different parts of Texas. But this time it didn’t stop. It rained on and off for days, weeks, and then for months! It has rained regularly now for most days of the week, for over 3 months.

Despite weather predictions that the winter will be dry; despite expectation that the drought will continue through spring and into summer, Texas has got lots and lots of rain. The drought monitor map of Texas, which was completely blood-red in color, is gradually lightening up little by little, and for many parts of the state (especially towards the eastern half where Houston and Dallas are!), the drought is almost over. How compassionate is the Lord!

This incident also teaches a great lesson. Usually, if our prayers are not answered right away, we are disappointed; and worse, if they are fulfilled at a later time, we often do not attribute it as the result of our original prayer, but instead ungratefully just wave it off as coincidence, chance, or even attribute it to our own efforts.

This experience is a reminder to us that prayers may not be fulfilled immediately, but that they will definitely be fulfilled when the time is right; and that we should be thankful all the same!

3 Responses to "Prayers are Always Answered: The Texas Drought Story"