This month’s quiz is based on Sri Ammalu Ammal, a great devotee who lived (almost incognito) amongst us. 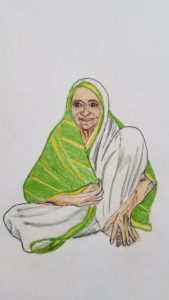 4. Girls, in those times, were married when they were quite young. Similarly, Ammalu Ammal too was married at a very tender age. And, within a very short time, she lost her husband. Her own family and community started considering her inauspicious from then on and tormented her by words and deeds. Driven to despair, she attempted suicide.
Name the lord who came in her dreams and forbade herself from killing herself.
a. Lord Parasurama
b. Lord Rama
c. Lord Narasimha

5. What was the ordinance that Lord Narasimha ordained on Sri Ammalu Ammal?
a. He commanded her to sing his praises and glories
b. He also promised that her basic necessities of food and clothing would always be taken care of.
c. All of the above

6. The above incident reminds us of a similar incident from _________ life.
a. Bhadrachalam Ramadas
b. Narsi Mehta
c. Bhakta Meera

9. Name the lord whom Sri Ammalu Ammal worshipped for the rest of her life.
a. Lord Rama
b. Lord Panduranga
c. Lord Jagnannath

10. Kanchi Maha Periyava had great regard for Ammalu Ammal and always spoke highly of her. He referred to Sri Ammalu Ammal as ‘NithyOpavasi’. What is the meaning of this
name?
a. One who fasts everyday
b. One who lives long
c. One who is a great devotee of the Lord Panduranga

11. Sri Ammalu Ammal has composed tens of thousands of kirtans. In which language has she predominantly composed the kirtans?
a. Tamil
b. Kannada
c. Telugu

12. Sri Ammalu Ammal had great fondness and reverence for HH Sri Sri Muralidhara Swamiji. In 2002, when she had darshan of Sri Kalyana Srinivasa Perumal (Sri Swamiji’s deity) in Madhurapuri Ashram, a beautiful kirtan poured out of her lips.
Name the kirtan she composed on Sri Kalyana Srinivasa Perumal.
a. Nambida Varige
b. Srirangaraja Srirangaraja
c. Nakku Kala Murtiyu Neene