Sanatana Dharma —The Universal and Eternal Way of Life

The entire edifice of Indian philosophical thought, known as Sanatana Dharma is founded firmly on the Vedas. Veda means wisdom, knowledge or vision. It is the perennial wisdom of ages. Vedas are the original scriptures of Hindu teachings, and contain spiritual knowledge encompassing all aspects of life. They can be really supposed to be the basic constitution of all religions. Humans did not compose it, and they have stood the test of time. 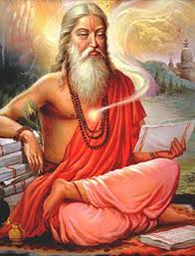 Sanatana Dharma, a perennial philosophy, is said to be the breath of the Lord, and hence is natural and ubiquitous. It extols love towards God and hence it is the supreme dharma, by which the heart of man achieves his highest welfare. It is Eternal Faith. Though it is very vast and exhaustive, at the core of Sanatana Dharma, we can find four fundamental doctrines, namely:

The entire perceptible universe, with all its diversities consisting of every animate and inanimate object of creation, is only the manifestation of ONE single Divine Ground, and apart from that they are all nonexistent.

Human beings can, not only acquire knowledge about this Divine Ground by the study of scriptures, observation, reasoning and inference, but can also realize Its existence by a direct communion with it through contemplation and meditation.

Man possesses a double nature of which one is a phenomenal ego confined to the body, mind and intellect, and the other is a higher Ego, which is the Eternal Self, surpassing the limitations of all earthly concepts of self-identification. It is possible for man, through spiritual practice and Divine Grace through the Guru’s blessings, to realize his identity with the Supreme Eternal Self.

Man’s life on earth has only one end and purpose; and that is to realize his identity with the Eternal Self and thus attain the undivided, unitive knowledge of the Supreme Truth.

Sanatana Dharma is really meant for all and it is above religion; it envisages that every individual should attain the Self and thus bring about the welfare of humanity.

Moreover it says, “bhagavatha vidhathraya kreeyathe tat sarvamhi shubhayathe”, meaning in short, every action of the Supreme Power and Creator is only for the good of its every creation.