In a village, there lived a young man whose family was very poor. This youth had vowed to observe ahimsa (non-violence) and considered sticking to this principle as the main goal of his life. He was hired to work in a poultry farm. Since this job involved harming poultry and was against his principle of ahimsa, he quit the job despite his family situation. Later, he got a job in a butcher’s shop. This job also involved harming animals. The man of principle that 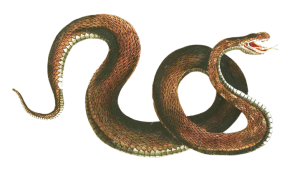 he was, he quit this job too.

As he was walking down the street thinking about his family’s plight and his own decision to quit the job, a stray dog suddenly started chasing him. Keeping in mind his vow of ahimsa, he began to flee. But the dog came after him and bit him. At that moment, the butcher passed by that way. On seeing him, the dog took to flight.

Seeing this, the young man wondered, “I have always stuck to my vow of non-violence and considered it to be the objective of my life. But the dog chased me and bit me. On the other hand, the dog feared the butcher whose profession demands killing animals!” and felt miserable.

He visited a saint residing in his village and narrated his story to him. The saint replied that his story reminded him of an anecdote told by Sri Ramakrishna Paramahamsa and narrated it to the young man.

“Once there lived a snake in a village. A saint happened to visit that village. The snake requested the saint to give it an upadesa that it could follow. In reply the saint asked the snake to refrain from biting and harming other living beings.

After several months, the saint returned to the village where the snake lived. He was shocked to see the pathetic condition of the snake. The snake’s body was wounded everywhere and emaciated; it was on the verge of death.

When the saint enquired why the snake was in such a state, it replied, “I have been trying to follow your upadesa and not harm anyone. Now as everyone knows that I will not bite, they beat me and trouble me!”

The saint said, “I only advised you not to bite and harm anybody. I never told you that you should not hiss and scare away those who come near you to harm you. You can protect yourself from those who harm you by scaring them away!”

After relating this story to the young man, this saint added, “Abstaining from harming any being is indeed a very high principle. But you should use your discrimination while bringing it into practice.”