A Divine, Unique Yatra to Vrindavan

A Divine, Unique Yatra to Vrindavan 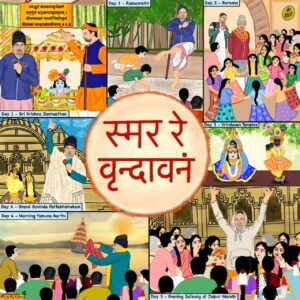 Thousands of devotees from around the world, including hundreds of devotees from North America, were blessed with the fortune of visiting the holy kshetra of Vrindavan-Barsana-Mathura with Guru Maharaj, HH Maharanyam Sri Sri Muralidhara Swamiji, from Nov 23 to 27, 2022.

For those 4-5 days, devotees were immersed in divine joy in the presence of Sri Swamiji as he compassionately took them to various divine sthalams in Vraja bhumi. 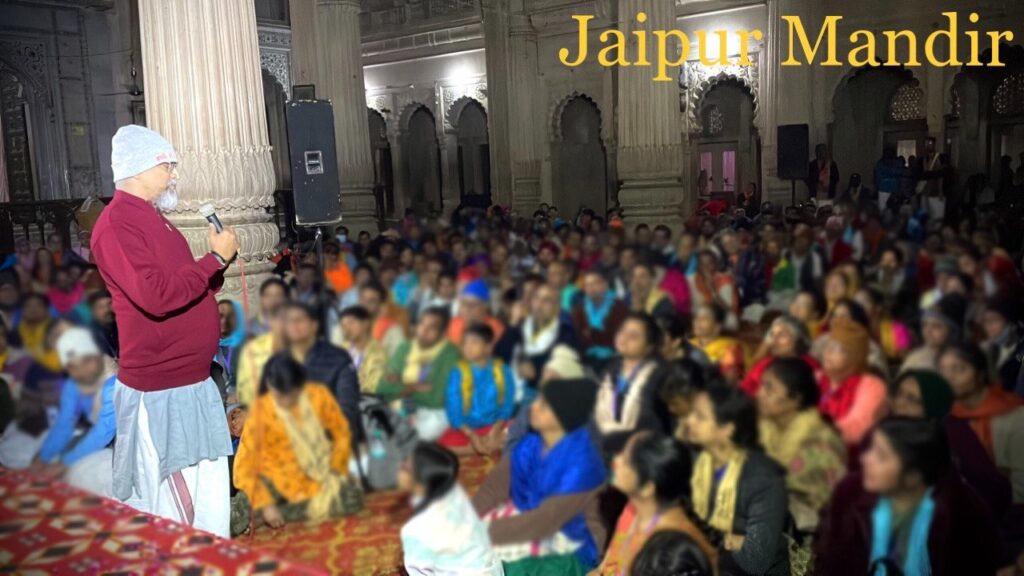 The Yatra officially began on Nov 24 morning at Jaipur Mandir in Vrindavan with all devotees congregating there joyfully with Guru Maharaj. A beaming Sri Swamiji seemed very pleased to see all the devotees from all over the world. After a brief introduction about the greatness of Vrindavan and vraja, all the devotees headed to Sri Krishna Janmasthan at Mathura. After having darshan of the prison cell where Bhagavan Sri Krishna was born, all devotees joined Sri Swamiji in a covered area with a stage within the Janmsthan complex. The stage was beautifully decorated, also with the Krishna Jananam sloka and words from Sri Swamiji’s kirtan Avatharithaan Kannan.

Walking up and down the stage, Sri Swamiji spoke on Sri Krishna Jananam from Srimad Bhagavatam, and celebrated the birth of Bhagavan Sri Krishna with great joy. Saying with a smile that Vasudeva and Devaki had specially requested him to conduct Nandotsavam in Mathura itself, Sri Swamiji celebrated Nandotsavam joyfully. Baby Krishna was placed in a beautifully decorated swing and Sri Swamiji asked all devotees to stand up and dance/jump with joy celebrating the birth of the divine Lord. The entire ambience was ecstatic and permeated with a divine joy that could be felt by every single person who was present. Even local devotees, who did not know Tamil, stood mesmerized by Sri Swamiji’s presence and listened to his words. 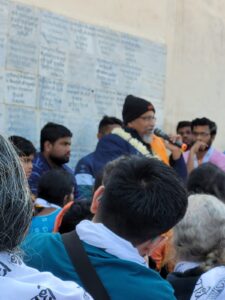 Following this, all devotees headed to Gokul where everyone first had darshan of the Ulukalam (mortar) that Sri Krishna had been tied to. Then they went to Nanda Bhavanam in Gokul where Sri Swamiji was waiting for all. There he spoke of the hilarious divine leelas of little Krishna, the complaints of the Gopis, and had everyone laughing with immense joy. From Nanda Bhavanam, everyone headed to the sands of Raman Reti, where Sri Krishna played with his friends. Sri Swamiji too asked all devotees to play there. Young and old alike went into a playful mood, ran around in a ‘train’ chanting “Radhe Radhe”, and also regaled Sri Swamiji with games of ‘thaandu kudhirai’, frog race and more. 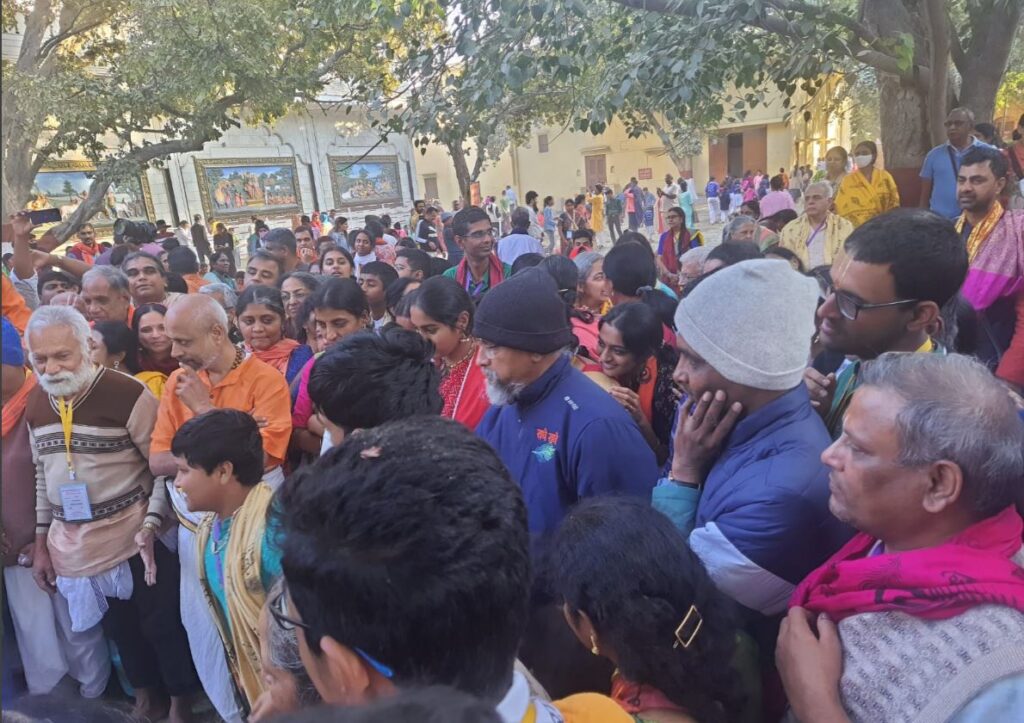 Sri Swamiji enjoyed himself thoroughly, watching everyone at play. The day ended with all the devotees heading back to Vrindavan.

The second day began again in Jaipur Mandir, where Sri Swamiji spoke of Srimati Radha Rani, and how Her name is so secret that it is barely found even in Srimad Bhagavatam, and yet, in Vrindavan, it resounds in every street, in every home, in every single person’s lips – “Radhe Radhe! Radhe Radhe!” Such is the greatness of the land of prema that is Vraja. 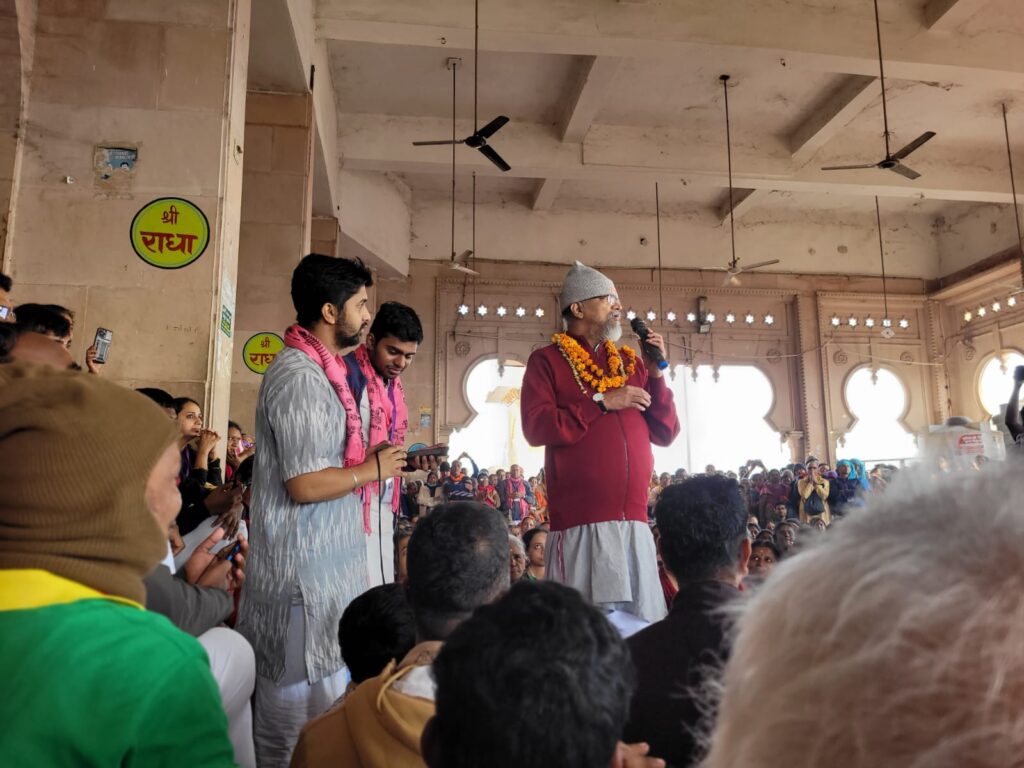 All the devotees headed to Barsana that day. At Barsana, everyone went up the hill to the palace of Srimati Radha Rani to have Her divine darshan along with Sri Krishna and her sakhis Lalitha and Vishakha. Many devotees then congregated in a large open hall below the main temple, chanted Radhe Radhe and awaited Sri Swamiji’s arrival. Sri Swamiji went up to have darshan of Shri Radha Rani and then came to the place where all the devotees were chanting Radhe Nama. He then sang several kirtans on Shri Radha Devi and Barsana. He also had all the young girls of the satsang – whom he called the ‘Radha Ranis of our Satsang’ – dance together in a circle in the center of the hall. 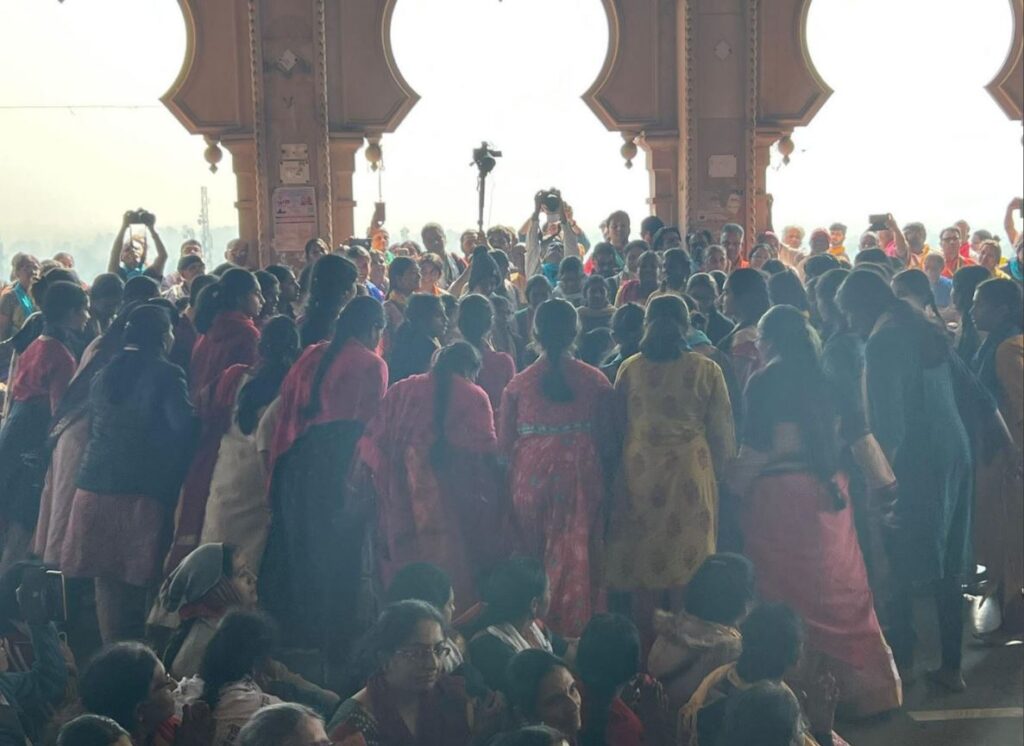 After the satsang in the Barsana temple, all devotees went down the hill, and once again Sri Swamiji spent time with everyone there, asking a few children to sing songs on Shri Radha Devi, and also honoring Barsana sadhus who had helped make arrangements for the yatra. From Barsana, all devotees headed to Govardhan, where they had darshan of Shri Govardhan Maharaj shila and the Manasi Ganga, before returning to Vrindavan. 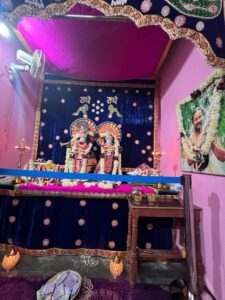 On the final day morning, Sri Swamiji conducted a divine worship of Yamuna Devi at Devariya Ghat just after sunrise. It was serenely beautiful on the banks of Yamunaji there, even with a throng of thousands of devotees. He then asked everyone to visit ‘Madrasi Mandir’, the place of Paranur Mahatma Sri Krishnapremi Maharaj (Sri Sri Anna) in Vrindavan, and then come back to Jaipur Mandir. At Jaipur Mandir, a divine Govinda Pattabishekam was conducted to conclude the four divinely blissful days.

The special pride for North America in this was that the Divine Couple of Sri Premika Varadan-Madhuri Sakhi for whom Govinda Pattabhishekam was conducted that day, was then blessed by Sri Swamiji for Namadwaar Dallas. That Divine Couple have made their way straight from Vrindavan to Dallas, Texas, USA to shower Their grace on all devotees there.

These four days will surely be reminisced with great joy by all devotees who were present both physically and in spirit in the holy Vrindavan dham with our beloved Master.