Sri Ramanujacharya on His 1000th Jayanthi

Message from Maharanyam Sri Sri Muralidhara Swamiji given on the occasion of Sri Ramanujacharya’s 1000th jayanthi and published in the souvenir for a play on the life of Sri Ramanuja presented in Houston. 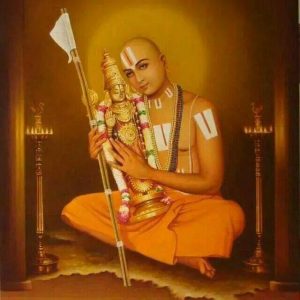 One is at a loss of words to describe the significance and the greatness of the accomplishments of Sri Ramanujacharya, the Yatirajar (king of ascetics), who descended in Sriperumbudur a millennium ago.

The divyadesams were glorified by the Azhwars. These divyadesams and the deities in these holy places were protected and handed over to us by Udaiyavar, Sri Ramanujacharya.

We apply tiruman on our foreheads, don’t we? But this is referred to as ‘naamam’ by the general public. How did this name come into being? This is due to the fact that we apply tiruman by chanting the Holy Names starting from Kesava till Damodara. It indicates that we are people who chant the Names of Lord Sri Hari. It indicates that we have rewritten the fate written on our foreheads by Lord Brahma with the Names of the Lord. By bestowing samashrayanam (pancha samskara – five deeds of purification) on us, Sri Ramanujacharya has made us an asset of the Lord.

He climbed atop the temple tower of Thirukoshtiyur and exhorted everyone to chant the Names of the Lord. He included the recital of the nectarine pasurams of the Azhwars in daily temple worship. Worried that the pasurams should not fade into oblivion, he initiated the Adhyayana Utsavam (an annual celebration of study, learning, and remembrance). By means of ‘shataari’ (the blessing of the Lord’s Padukas on the devotee’s head in temples), he established the connection between Bhagavan and the bhakta.

His reformations were all met with stiff resistance from different fronts. They tried to poison him to death; he was exiled; he faced many more such troubles. Yet, facing all these difficulties alone, he continued with his work. Why? Out of sheer compassion that not even a single jiva (soul) is deprived of receiving the grace of the Lord!