Sri Swamiji’s Blessing Message on the inauguration of Atlanta Namadwaar, on Nov 8, 2017

For this Kali Yuga, Bhagavata Dharma is not only the apt dharma, but also a joyous one. Only if something to be performed is sweet and joyous to practice, will people enjoy doing it. If it is strenuous to perform, most people generally will not prefer to do it, even if the result is of immense magnitude. In general, everyone will have a liking for, and enjoy, only that which is easy, sweet and pleasurable. So our path should be pleasurable but also in line with dharma. 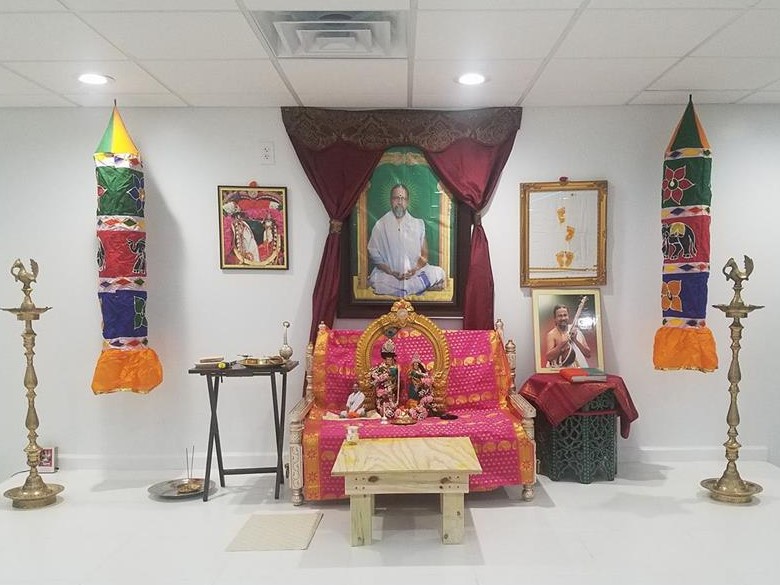 Both joy and sorrow are a result of our own karma (actions). Any activity of ours that is away from dharma causes suffering, and any activity that is in line with dharma brings us merits. So if we know what needs to be done, then the fruit is automatically reaped. And if we avoid what should not be done, then we can avoid the result that we do not want.

What is Bhagavata Dharma?

In Srimad Bhagavatam, Prahalada beautifully shows the nine limbs of Bhagavata Dharma as nine steps; that can be climbed one by one to reach higher [in the path].

Of these Nava-vidha bhakti sadhanas (nine ways of doing bhakti), it is enough to practice even just one of these nine paths; or one can also practice all the nine, in turns.

Devotees like Parikshit always only listened to the glories of the Lord (Shravanam). They did not practice any other sadhana nor did they have the time to do so. If we keep listening to Bhagavatam repeatedly or do parayana (recitation) of Bhagavatam continuously, we will attain jnana (wisdom), vairagya (dispassion) and bhakti (devotion). No separate special effort is needed from us.

In a same way, Kirtanam. If we keep singing the Lord’s Names and glories all the time, it is enough. No other sadhana is needed.

Next is Smaranam, which is remembering the Lord’s qualities, His leelas (sportive acts), His form, His glories, His opulence. Or remembering His leelas…. O Krishna, you lifted the Govardhana Hill; kicked Shakatasura; went skywards with Trinavarta! Or reminiscing His qualities… Krishna, Putana came to give you poison… how did you give Moksha to such a demoness?! How compassionate you are! You even went as a messenger for the Pandavas! We can remember any or all of the Lord’s qualities, sportive acts, His form, His glories and His opulences. That is Smaranam.

Then comes Vandanam (prostration). There was a bhakta in Pandharpur by the name Yoga Paramananda. His main bhakti sadhana was to read a sloka of Bhagavad Gita and then prostrate unto the Lord and repeat again. This way he would do 700 prostrations in a day.

Or serve the saints which forms Pada Sevanam.

Then comes Archanam (worship of the deities by offering flowers, Tulsi etc). Some saints are greatly attracted to this form of worship. They would collect lots of flowers or Tulsi and constantly offer them to the Lord. I have seen such great ones who remain in this state for a long time.

Next is Dasyam, which is to serve the Lord. This service should not be for any result, for money, not as a duty, not with a dull heart, not as a means to attain Liberation or to cleanse our mind, not in a disinterested fashion, not with a feeling of, ‘Why should I be the one to do this!’ But as ‘This is a great fortune! Who will get this opportunity!’ When it is our Lord, our loved One, then we must feel that only I will draw rangoli for Him… it is I who will make a garland for Him… this is a rare opportunity that no one will get! I will not let anyone else do this! There is not an iota of laziness or boredom or dislike or a sense of duty, but pure Bliss. Only with this feeling can you gauge whether you have bhakti (devotion) or not. If we have aversion to the task or if we want to push it away to someone else or if we think of it as a duty, then devotion becomes a mere talk. A true bhakta will never relinquish a chance to do kainkaryam (service) to his Lord. Because he gets extreme joy and bliss in serving His beloved Lord.

Then comes Sakhyam (friendship). We always complain that God does not talk to us. Did we ever talk to God?

Start talking to the Lord. O Krishna, you are decorated so beautifully today! This silk dress looks very beautiful on you! Did you eat the sweets I made for you? Did it taste delicious? Did you like them? Ask Him. Slowly He will start talking to you and you’ll understand it.

Atma Nivedanam is to offer everything to the Lord.

These are the nine ways of doing bhakti that he (Prahlada) showed. However there is a root or source for all these types of bhakti. If we do this one task then everything will follow automatically. It is to chant Mahamantra (Nama), the divine names of the Lord!

If you have this Mahamantra, then this Nama will get you vairagya (dispassion), jnana (wisdom) and bhakti (devotion). This Nama will even bestow you with the state of Nirguna Samadhi (Oneness with the Lord). Just Nama!

In the initial stages one cannot chant this Nama with devotion. This is true for all. Don’t think, “I don’t have bhakti; so I don’t have to chant Nama.” Instead, chant it in a mechanical fashion. Chant it with stubbornness. Chant with a count in mind. As you keep chanting, the power of Nama will purify you. When the dirt in our mind is slowly removed by this Nama, automatically vairagya, jnana and bhakti will flower.

What can this Nama do? There is nothing that this Nama cannot do! Just as any product is tested in a lab to prove that it works as per specifications, if you doubt if Nama can protect you from troubles, test it out by chanting; it will protect you. It is proven. It will definitely protect you… no matter whatever the danger, how difficult the suffering. If you chant Nama, the troubles will go. I am saying this even though it is only a materialistic gain.

Nama will lead one to even Moksha (Liberation). But one should chant Nama incessantly day and night with faith in it. Not just 10 or 20 Namas, but a lot of it. You don’t need to do any other action or practice. No need for pooja, dhyana or yoga or any other practices. Other practices are only an accessory.

A hungry person is satisfied with just curd rice. In a feast, the pachidi, payasam, etc. are only accessories. Similarly, as a decoration (for enjoyment and variety) we have pooja, procession of the Lord, dhyana, etc. But the root for all of these is Nama.

It is said about Bhagavatam that it is the path (sadhana) and it is also the destination (sadhyam). What is the sadhana? What should be studied? Bhagavatam. What is the fruit of studying Bhagavatam? Bhagavatam!

Similarly Nama is the path (sadhana) and Nama is the destination (sadhyam). All we need to do is constantly chant Nama.

So when we continously chant Nama and if bad thoughts, jealousy, envy, desire, anger, etc. arise, one should not get frustrated. The reason is whatever has gone deep into our minds will keep arising. These vasanas (latent tendencies) are etched very deep in our minds. So they raise their heads now and then. But over a long period, these thoughts will let go of you and disappear. Instead if you stop chanting because of such thoughts, then Nama will disappear and you will be left with these thoughts continuing to arise. So one should chant without any frustration, and with the faith that this is a path shown by great saints, that this will never be false, and will definitely lead me to God.

A simple path for all! No one needs to learn anything! If we see a baby and tell it to do dhyana or yoga, it won’t know, but if we tell it to sing Rama or Krishna, it does so while clapping its hands, is it not? Even a child can follow this path.

In any nation, at any time, anyone who has been born… can chant Nama.

With this intent in mind, that everyone should chant this great, simple Mahamantra (Nama) and through it should attain happiness and auspiciousness, prayer centers where Nama is given prominence were opened; first in Chennai, then other areas of Tamil Nadu, then other states and finally in other countries.

There are no rituals or rites in these prayer centers. Only Nama will be chanted. From dawn till dusk there will be Nama, Nama and Nama alone. That’s how it should be. For these prayer centers, there is no need for Kumbhabhishekam (consecration), Yantra (incantations), Prathista (installation of deities) or any other such expenditures. There need not be any pooja, archana… Only Nama!

This appears simple right? But it has immense power and yields huge results. However we should chant a lot and make use of this power.

From these prayer centers, Nama should spread out to other places. With this desire, these were started in Tamil Nadu and slowly spread to other parts of the world such as Houston, Sydney, Melbourne, Singapore, Malaysia. These cities have their own Namadwaar prayer centers! And now Atlanta has one too!

Apart from these cities, in other countries such as Muscat, Dubai, Abu Dhabi, Indonesia, and many others, even though there is no Namadwaaar, people chant in each of their homes and Nama has spread far and wide.

Our greatest service to the world will be to spread Nama in all countries, and take it to every corner, wherever possible. Other services are not eternal. This alone is eternal and everlasting. It is the greatest good we can do to anyone.

Let this Atlanta Namadwaar continue to function well. May many people come to this Namadwaar and be benefited. May Madhuri Sakhi and Premika Varadan’s complete grace be on this Namadwaar, and may all auspiciousness be bestowed on all the devotees.

May there be more and more Namadwaars in America as well as throughout the world. Bhagavan should wholeheartedly shower His blessings for this.