The following article is from Fremont, CA Gopa Kuteeram center, on the story of Bhaktha Senanayi. 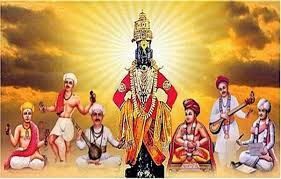 Senanayi was a devotee of god and a barber. He lived in Pandharpur. One day the king was looking for a barber so he asked people and they suggested Senanayi.

One who works for the king cannot work for others and Senanayi agreed to be the king’s barber.  He had to arrive at the palace at 8:00 am sharp. For the rest of the day he was singing Panduranga bhajans. One day he saw a group of sadhus and went to the temple with them because there was still some time left before he had to go to the king’s palace.

Two jealous merchants came and saw Senanayi doing prayers. They went to the king and told him Senanayi was doing prayers in the temple. The king was furious. He asked him what did you do. The greedy merchants replied, “We told him it was time to go to the courtyard but he  said he doesn’t care.”

Then the King went outside in his backyard and saw Senanayi standing there. Senanayi said, “I was waiting here for a long time.”

After Senanayi was done, the king headed toward his courtyard. When he reached he saw Senanayi apologizing, “Sorry I did not come. I forgot.”

The king replied, “You just came and combed my hair.”

Then Senanayi realised that Lord Panduranga had come in his form.

Moral of the story :When you pray to God, God will help you in some way.